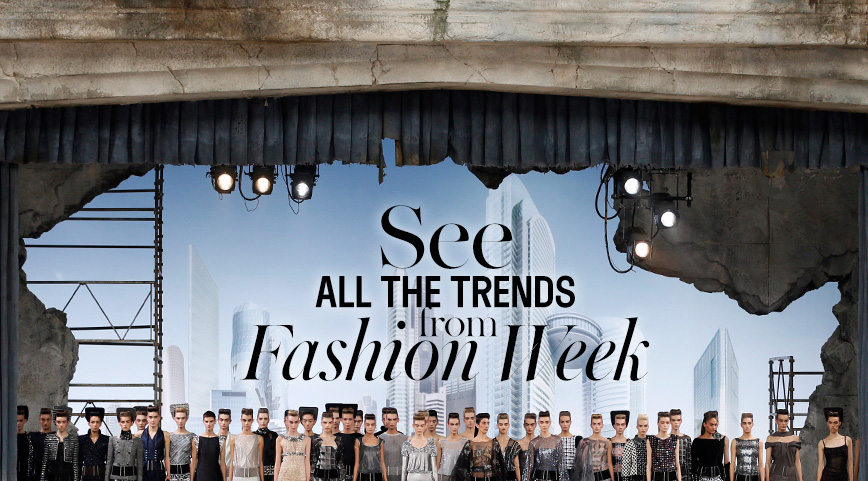 Day 1
From the Atelier Versace Couture Spring/Summer 2014:
They had the presence of Lady Gaga and Mario Testino

The runway was presented by sublime dresses, full of vivid colors and the powerfull black and white palettes.

The show had also the touch of oriental looking dresses, tuxedo and veils, silk satin tuxedos.

From the Christian Dior runaway:

Taking inspiration from 50′s Dior, Raf Simons re-invented the sack dress, the loose, chemise-style sheath with a gathered cape back with a lightly structured, in pastel guipure lace or fuzzy, midnight blue silks.

At the Giambattista Valli Spring/Summer 2014  show:

You could see what Giambattista means by saying “I dress real women. I don’t want to make a kind of couture that is detached and distant,”
And all you could see were pretty dresses, with a sparkly, bejeweled impact.

Karl Lagerfeld’s exceptional Chanel couture collection embodied the concept of the “incredible lightness of being” in poetically handwoven cloth, and embroideries as light and magical as thistledown.

The light, soft colors with the sparkly touch or the use of an exotic look by using feathers.

Through the Bouchra Jarrar couture collection:

“I really believe in couture for day” said Bouchra Jarrar

For this couture collection, she says she wanted her clothes to “catch the light.” For the first time, the sophisticated inclusion of color—silvery blues and vibrant purples—reads as positively rich.

Was centered on two of Giorgio Armani’s career-long themes: his interest in Asian cultures, filtered through his deep love of early black-and-white movies.

All the heads were tightly wrapped in scarves. Earrings—again in that peacock motif—sparkled.

Day 3
Was to be amazed with all the high fashion haute couture with names like Jean Paul Gaultier and Valentino.

From the Maison Martin Margiela Spring/Summer 2014 couture runway:
Bricolage, repurposed vintage clothes, found objects, and references to the tools of the fashion trade are the foundation of the Martin Margiela way of doing things.

That’s why the embroidery here is actually a mass of buttons, ring-pulls, keys, and chains applied to dresses and vests molded in the dressmaker’s dummy Stockman shape.

“Life is a butterfly! So all the collection is that!” explained Jean Paul Gaultier.

Using the simple metaphor and seemingly single idea to build a collection that proved to be brimming with playful reinterpretations of those winged beauties and rich with inventive technique and craftsmanship.

Of Valentino‘s Spring/Summer 2014 Haute Couture show:
A show which pushed the parameters of their collection to include both frothy tulle ballerina dresses and impeccably stark, almost colorless columns.

The Valentino pair have been challenged to demonstrate that they’ve got more up their sleeves than long, covered-up dresses in lace—the resonating emotional innovation which first swiveled fashion’s eyes in their direction.

They dared to demonstrate that they can go beyond that captivating silhouette, continue with magical embroidery (a whole Garden of Eden scene on a skirt), and make short dresses which have as much innocent romanticism as their long ones.

A real big contribute from the greatest haute couture designers, for the fashion world.
( some informations, quotes and photos have copyrights from Vogue )