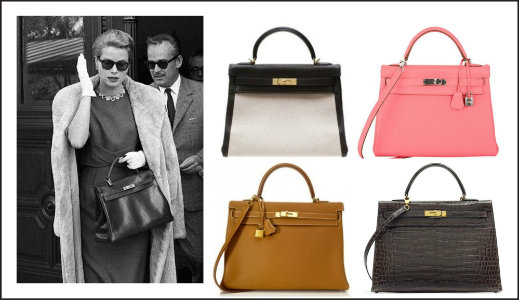 Timeless Handbags Inspired by Empowering Women
Love Happens when you find the perfect bag inspired by strong and powerful women all over the world. A pure form of self-expression and signal of personal style, handbags are also an entrée to luxury and glamour. Hermes, Chanel and Louis Vuitton are some of the most iconic brands for handbags. Other of our favorites include Balenciaga, Celine, Prada, Fendi, and Gucci. Throughout times, these were women that inspired some of the most iconic handbags ever made and we want to take you to this world where top fashion designers were inspired by empowering women.

The Birkin bag came to be in the mid-’80s after Birkin had a chance run-in with then-CEO of Hermès Jean-Louis Dumas on an airplane. Years later, Birkin would auction off her own bag to benefit Red Cross efforts in Japan.

Gucci’s hobo bag style might have been born in 1947, but it was only after Jackie Kennedy Onassis carried it in the ’70s and Gucci swiftly renamed it The Jackie that it became a true legend.

Hermès had another hit with the single-handle Kelly bag. Created in the late 19th century, the style gained popularity in the ’50s, when Grace Kelly carried it in To Catch a Thief and in her real life as the Princess of Monaco. Hermès renamed it the Kelly bag in 1977.

Sofia Coppola teamed up with Louis Vuitton on a duffel-shape bag in 2010 that bears her name.

Pro tip: If you want a bag to take off in the retail market, name it after the world’s pre-eminent It girl. Such was the story for Mulberry’s Alexa bag, named after consummate trendsetter Alexa Chung.

A close friend of designer Jason Wu, Diane Kruger is the namesake for Wu’s top seller, the Diane.

Cara Delevingne created a bag for Mulberry, the backpack-strapped Cara, during her time as the house’s spokeswoman.

Few women have as much fashion-world clout as Anita Pallenberg. This cross-body from Saint Laurent captures a bit of her bohemian ethos.

It’s no surprise that Tom Ford would name his tote after his longtime Gucci stylist and friend Carine Roitfeld.

Source: Boca do Lobo Blog
See also our article on Special Handbags and 50 Fashion Designers of all time