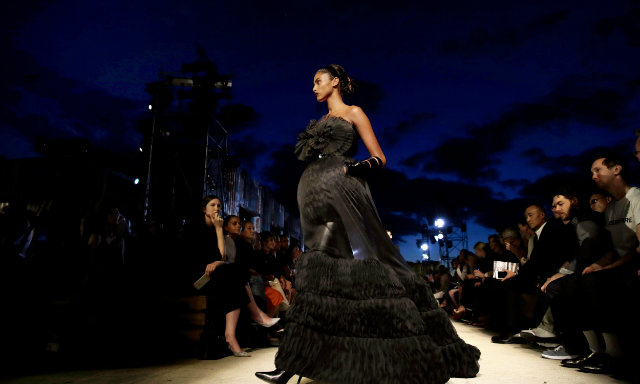 Wang’s show started with a lot of polemic posts on social network regarding his show. There he required a reset due to the context surrounding the New York fashion week show. It was not only the 10th anniversary of the designer’s eponymous label, but the first since the July announcement that he was departing as creative director of Paris fashion house Balenciaga.

It was a time, then, to reset and reassert the Wang look, to go back to the label’s roots. The designer did this in a collection that featured signatures recognizable to what is now his significant following.
The first outfit was full of Wangisms: a crop top, slouchy trousers and lots of studs on the model’s shoes and earrings.
Other boxes were ticked as the show, which included men’s and women’s wear, developed: it included mesh vest shapes, sweaters with lattice inspired by American footballs, hooded tops, bomber jackets and tracksuit trousers.
The overall mood was the one Wang has made his own: slouchy, cool, off-duty style that never looks like it tries too hard.

Backstage, a breathless Wang explained the collection came from leaving any “high concepts” behind and instead thinking about what “the girls I know wear … and the characters of the girls who wear them”.
This, arguably, is the position Wang came from since the start of his fashion career.
If he now produces shows beamed live around the world, and boasts a front row that features Mary J Blige, Lady Gaga, Nicki Minaj and Kanye West, he began by dressing the cool downtown girls who were his friends, and watched as others who wanted to dress like them bought his clothes.
Designing a collection for H&M last year (announced on Instagram, of course) was perhaps an acknowledgement that, to a generation of fashion-literate people under 30, Wang’s is a rock star name.
This show had something of a stadium gig about it. As invitees made their way into the venue, they could buy merchandise as they would at a gig.

For Givenchy’s first show at a New York fashion week on Friday evening – 11 September, the anniversary of the city’s 2001 terror attacks – it must have been tempting for creative director Riccardo Tisci to send out a collection packed full of stars and stripes.

But, as the fashion world should know by now, that is not Tisci’s style. This is a man full of surprises – one who put Donatella Versace in his advertising campaigns and almost single-handedly made the sweater a high fashion staple.
Here, he kept the Americanisms to the minimum – an abstracted American flag in shiny black appeared on the black jackets of suits worn by male models, a whisper rather than a scream.

Instead of pure patriotism, Tisci’s American Dream was about bringing different cultures together – something that makes sense to those who know the Italian-born designer as a rare voice pushing diversity in fashion, across race and gender.
This inclusive attitude was made explicit in the audience which numbered Tisci’s gang – Kanye West, Kim Kardashian, Jennifer Hudson, Karen Elson and Liv Tyler – as well as more than a thousand students who had won tickets to the show.
If all the buzz in the build-up had been about Caitlyn Jenner attending – or possibly walking the runway – those disappointed would perhaps have been satisfied by a different kind of performance.
Working with friend and artist Marina Abramović, this was a fashion show on a grand conceptual scale. The huge set consisted of recycled metal panels nailed together, and featured several live performance art set-ups, including a woman standing under a stream of running water and a man holding tree branches, as a symbol of “support and life force”.

There was also live music, which featured Tibetan monks chanting and a rendition of Ave Maria for the finale.
While it took place on a pier on the Hudson River, flanked by skyscrapers, this was hardly the usual tourist holiday snap fodder.
The collection itself, late to the runway by an hour, was extensive and contrasted the performance art with some commercial clothes.

The decamping of the show for this essentially Parisian house to New York – the first time that the house has shown out of the French capital in more than 60 years – is ostensibly to mark the new store opening on Madison Avenue, and this was a showcase of all the clothes that will fill it come spring 2016.
This year also marks 10 years of Tisci at Givenchy and there was something of the retrospective in the first part of the show. It featured slinky, beautifully cut silk and lace slips worn with slouchy black trousers, and dressing gown-style coats in a colour palette of black and white, sometimes with bandage-style tops.

She is still a relative newbie in the industry but Kendall Jenner is taking New York Fashion Week by storm this season. The part-time reality star emerged as the star of the runway while walking for Diane Von Furstenberg on 13 September.
Held at Spring Studios, the 19-year-old led the catwalk showcasing a white and gold embellished playsuit from the fashion designer’s latest collection and teamed her look with a flowery headpiece, fringed handbag and bold make-up with hues of blue and green. Joining Jenner on the catwalk were her model friends Karlie Kloss, Jourdan Dunn and Bella and Gigi Hadid, all of whom she was pictured hanging out with backstage.

Explaining the inspiration for her collection, designer Furstenberg told reporters backstage: “It’s a celebration of beauty, of freedom and individuality. My message, as always, is to be the woman you want to be.”
It had been a hectic day for the Keeping Up With The Kardashians star who had taken part in a photo shoot hours before and was forced to shave her legs in the car en route to the DVF show. The model shared a video on Instagram of her grooming technique with the caption: “So much fashion, not enough week#YouGottaDoWhatYouGottaDo.”
See also our article on the Best Fashion Designers of all time and on Diane Von Furstenberg. 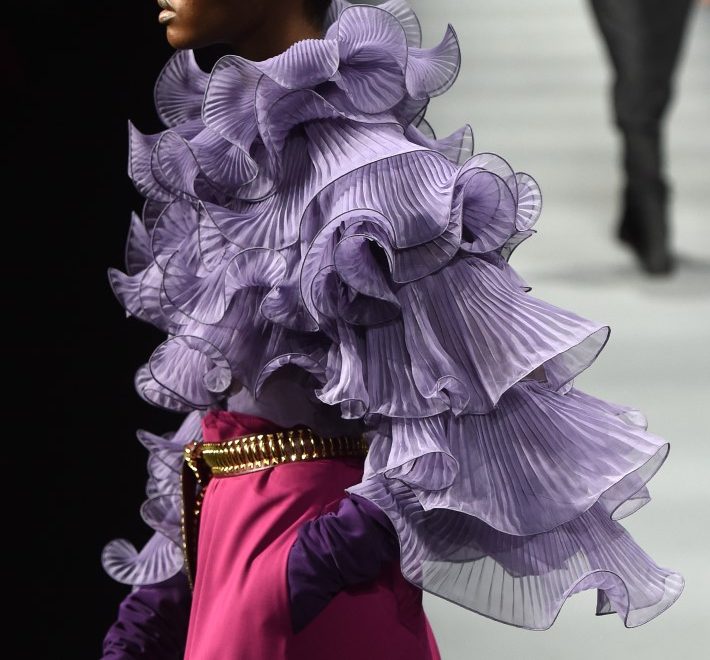 FASHION
The Best of All Fashion Weeks 2020 END_OF_DOCUMENT_TOKEN_TO_BE_REPLACED 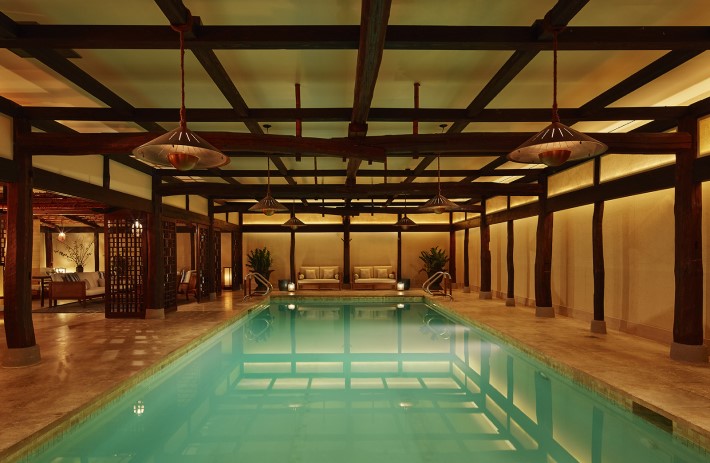