Inside the Manolo Blahnik Documentary 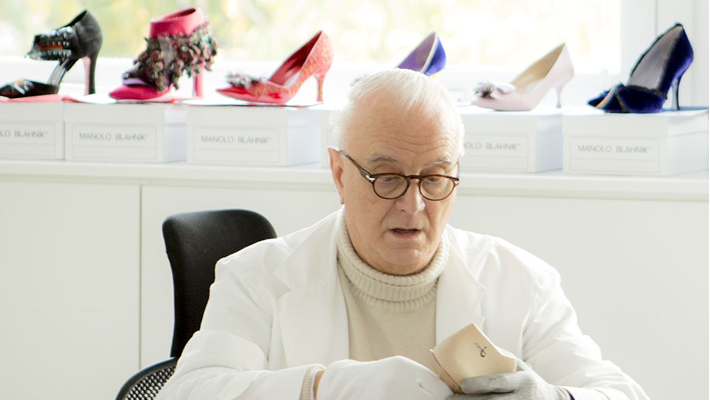 Inside the Manolo Blahnik Documentary

As New York Fashion Week came to a close back in September shortly thereafter the Manolo Blahnik documentary debuted in Manhattan with a star-studded audience. Manolo: The Boy Who Made Shoes for Lizards, directed by the fashion designer’s close friend, fashion writer and editor, Michael Roberts offers a glimpse into the life of the 74-year-old who went from a young boy making shoes for lizards out of Cadbury wrappers to perhaps the most well-known shoe designer of all time.

Adored by everyone from princesses to celebrities, the film taps into Manolo’s vast fan base of famous public figures with commentary by Caroline Herrera, Iris Apfel, Anna Wintour, Rihanna, Naomi Campbell, Iman among others.

Although many of the mini-interviews are filled with what may be inferred as frivolous praise, and according to some critics lack any real depth or insight, seeing Anna Wintour without her signature sunglasses on and opening up about her love for Manolos was something in and of itself. Anna reveals, “I can’t remember the last time I wore somebody else’s shoes. I mean, I don’t even look at them.” And adds, “He may not recognize this, but he has become a legend.” Iris Apfel, who is often seeing wearing the brand’s flats, tells viewers, “I have no idea, I can’t count that high” when asked how many pairs she owns. And Caroline Herrara estimates her personal collection at somewhere over 1,000 pairs!

TOP 50 FASHION DESIGNERS OF ALL TIME

Manolo Blahnick’s sketch of his first shoes for Kansai Yamamoto, called The Brick, 1971

Manolo Blahnik’s sketch of a 1971 design for Ossie Clark

“My joy in life is spending time in the factories, you see,” Manolo says. “It is quite sad to say that, but this is the only thing I love.” The documentary clearly shows how enamored the designer is with his craft, even after so many years, and he still creates the designs himself, truly amazing. When discussing the film in an interview with Vogue he says he hopes the film inspires young people to follow their dreams.

Born on Canary Island and raised in London, Manolo is shy and humble to the core. The film forced him out of his comfort zone behind the scenes and attempts to provide an intimate portrait of the man behind the shoes, albeit slightly light and fluffy on the details it does share some of the pivotal turning points in Manolo’s career beginning with the push toward footwear by former magazine editor Diana Vreeland in the early 70’s who told him, “Young man, make things. Make accessories. Make shoes.” Viewers also get to experience some of the nostalgic moments that helped shape the brand such as the 23 custom mules made for Sofia Coppola’s Marie Antoinette and Carrie Bradshaw’s love for Manolos on Sex and the City.

With a massive collection of designs, a documentary, the recent museum exhibition Manolo Blahnik: The Art of Shoes, and another exhibit planned for 2020, you might think Manolo is thinking about retirement, but he tells Vogue, “I love to do what I do. Are you kidding? I challenge myself: This is not good enough. I have to do better. This is what keeps me going—it’s my nature. And people have really asked me a million times, Why don’t you do glasses and things and hats, and blah blah. Are you out of your mind? I don’t want to do that at all. No. I do shoes, and I do the best I can.”

Rotten Tomatoes gives Manolo: The Boy Who Made Shoes for Lizards a 64% and this is probably just about right – for those who love Manolos and a good lighthearted film this documentary fit the bill, but for those seeking something deeper they were most definitely left wanting more.