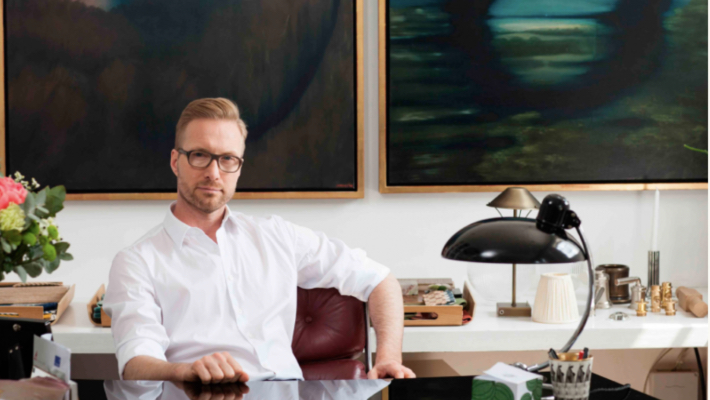 Martin Brudnizki’s complex understanding of aesthetics was instilled in him at a young age. His mother worked as a stylist, while his father was a mechanical engineer. The combination of these two professions paired harmoniously, making quite the impression on Martin Brudnizki, who became enamored with beautiful design. Today, the Stockholm native incorporates elements of both style and functionality entwined in his eccentric and whimsical aesthetic. 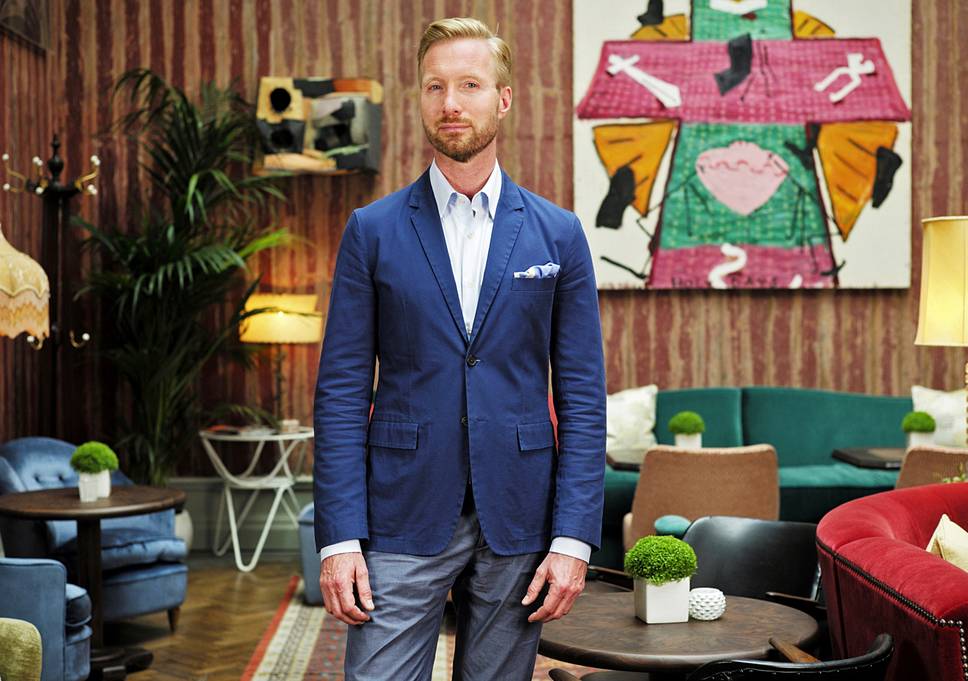 After earning a degree in Economics at the University of Stockholm, Martin took his talents to The American University in London to study his passion, Interior Architecture. His time spent here proved significant; each day he became more intrigued by design, studying an awe-inspiring array of architects and designers. Carlo Scarpa, Paul Dupree-Lafon, and Dorothy Draper were a handful of visionaries that Martin studied and admired following graduation, where he accepted many successful positions at well-regarded interior design firms. In 2000, Martin took a leap of faith, establishing Martin Brudnizki Design Studio in London. Following a successful decade, he created a New York Studio in 2012. 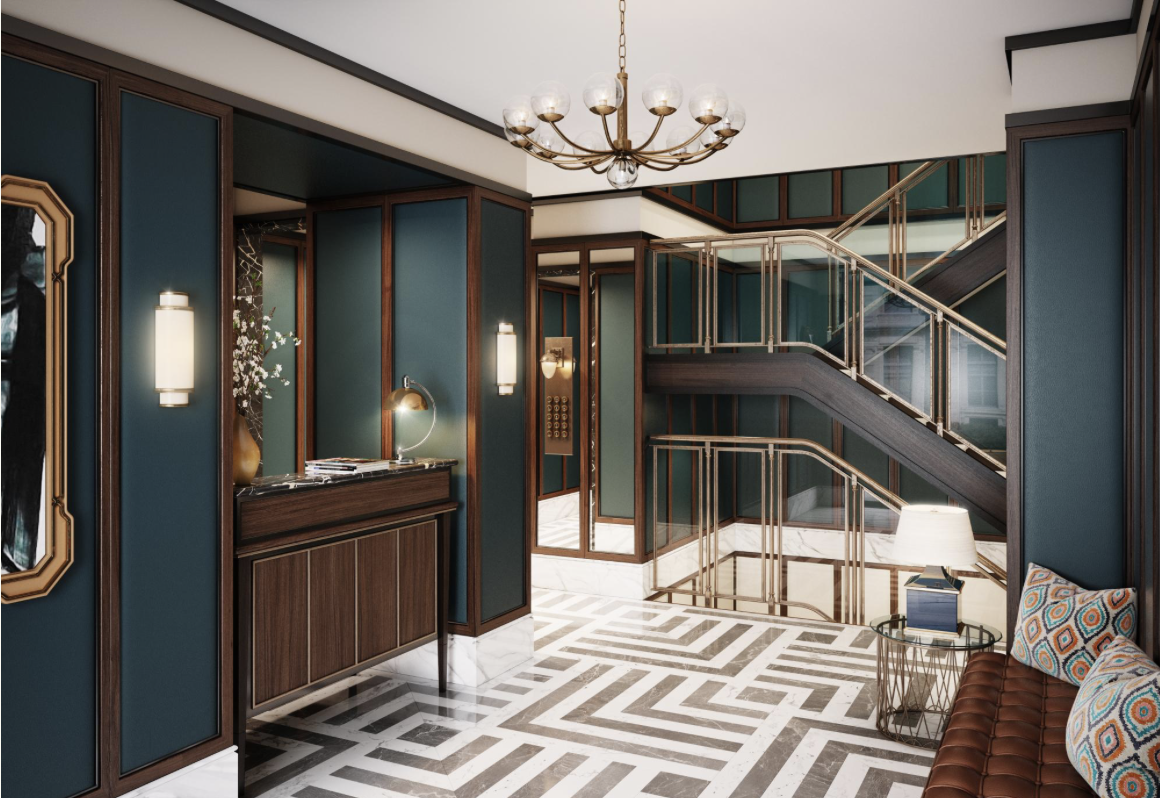 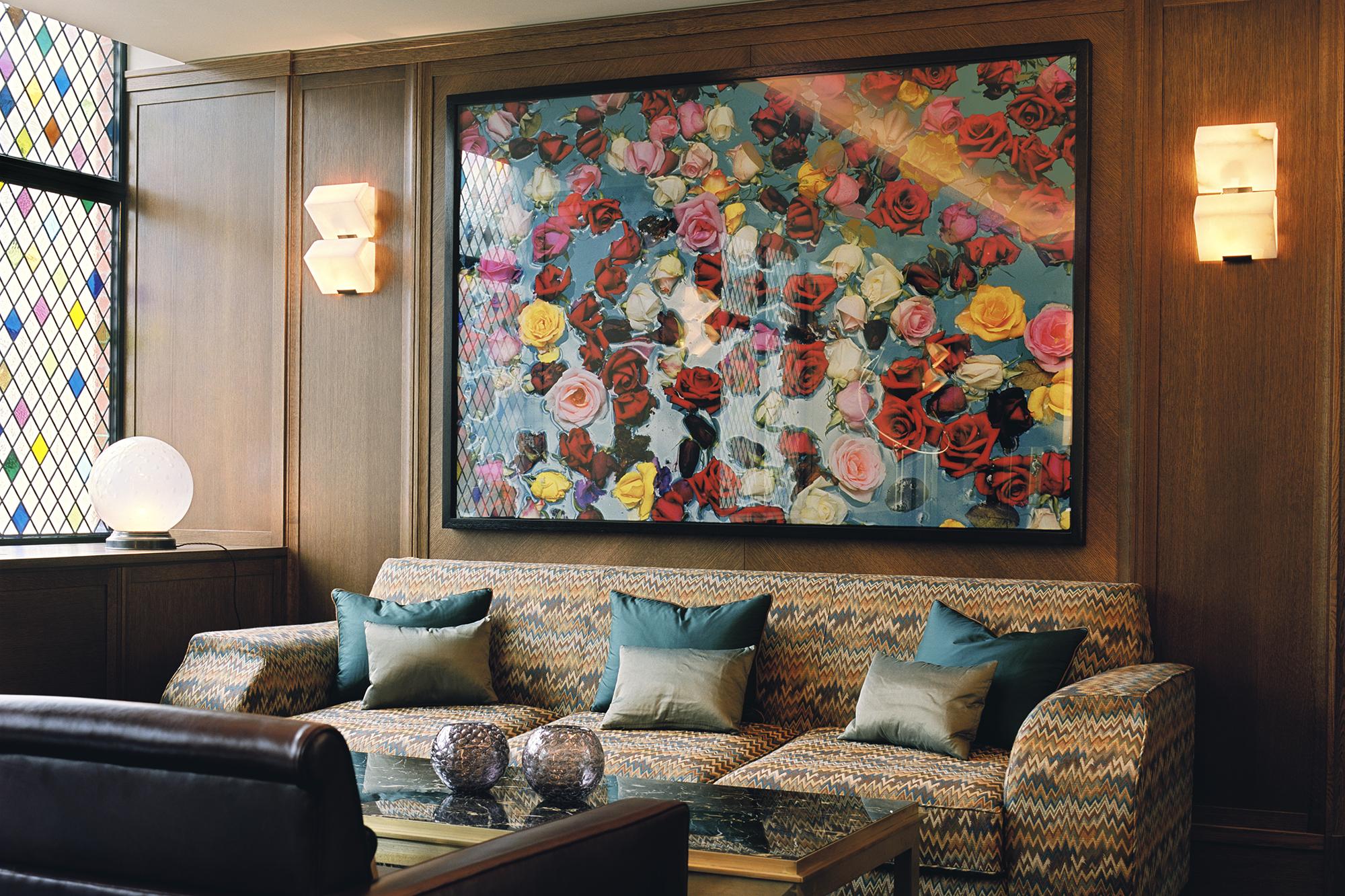 Martin Brudnizki Design Studio is internationally esteemed as a top interior and architecture design firm. His team, composed of over 70 interior designers, architects, lighting designers, product designers and art consultants have designed and created incredible spaces for residential clients around the globe and some of the world’s top hotels and restaurants such as England’s Four Seasons Hampshire, Soho Beach House in Miami, and Bullion Restaurant in Dallas. 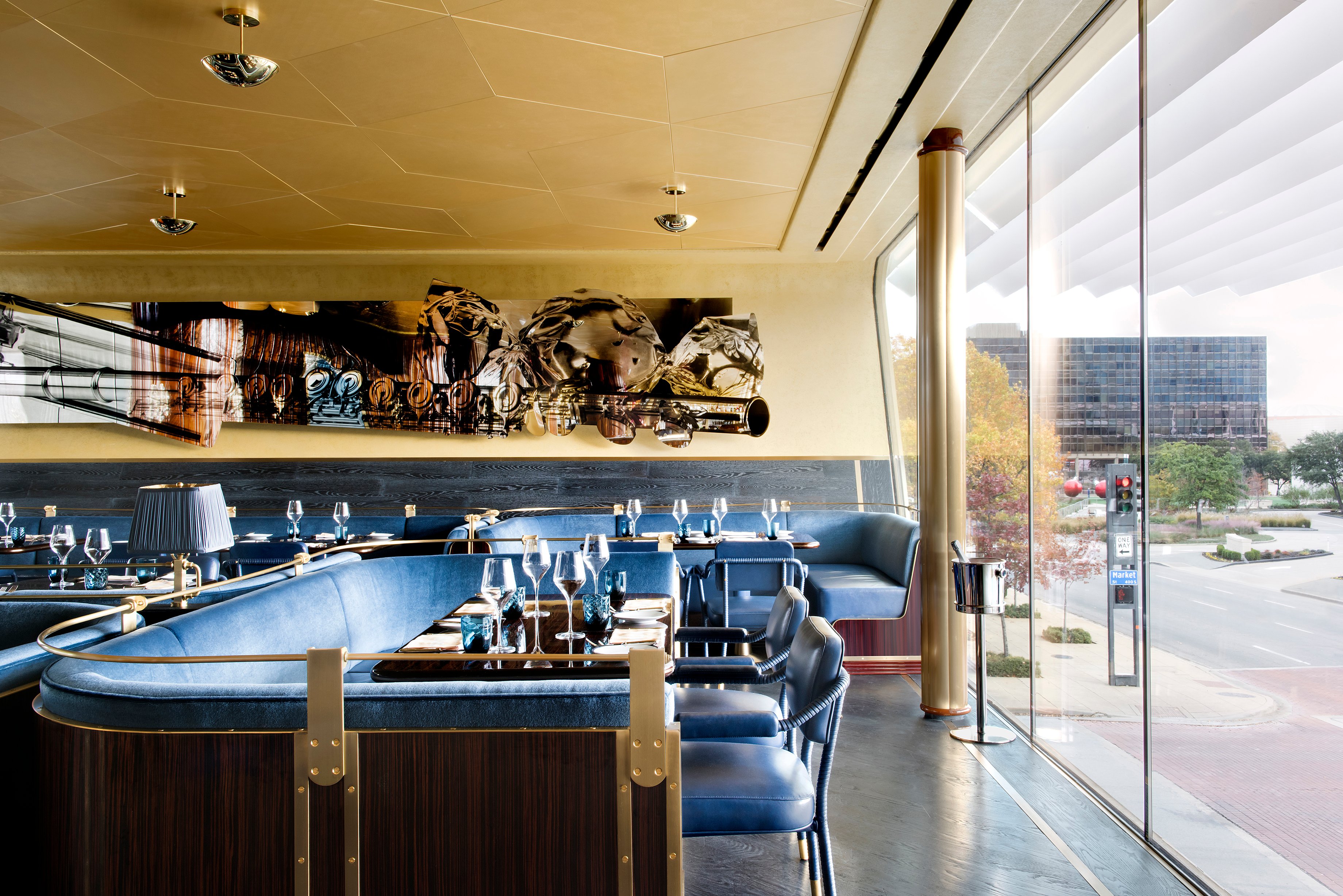 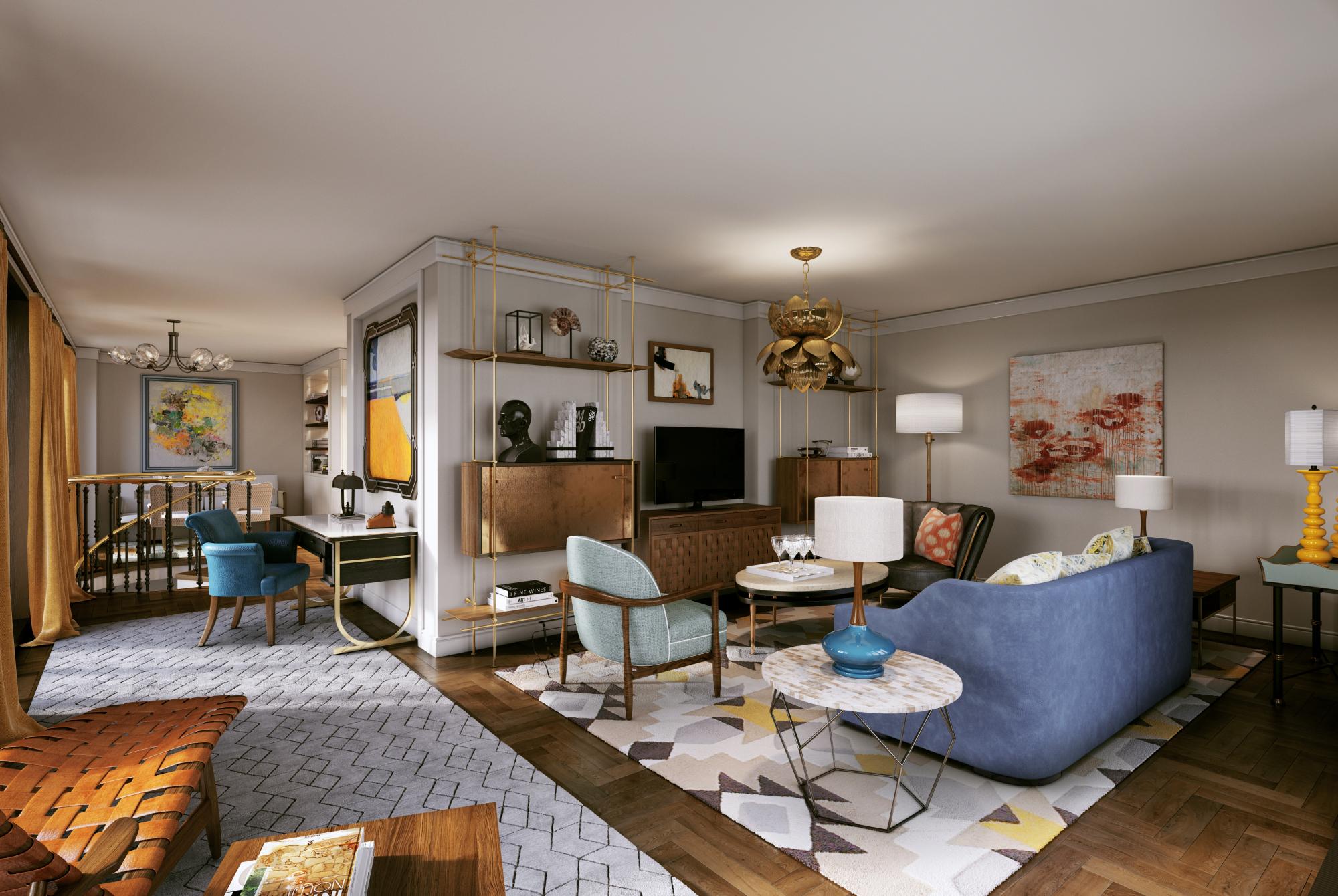 His most recent project is absolutely breathtaking, displaying exquisite attention to detail and a complex yet melodious array of color and patterns.  The Georgian townhouse turned exclusive London club, Annabel’s, portrays Martin Brudnizki’s most impressive, mesmerizing work. Through its unrivaled atmosphere and unique oasis, Annabel’s has emerged as one of the most celebrated clubs in the UK. Open all day and all night, Martin Brudnizki’s reimagined design embodies the club’s sense of whimsy and adventure, making it London’s trendiest getaway. 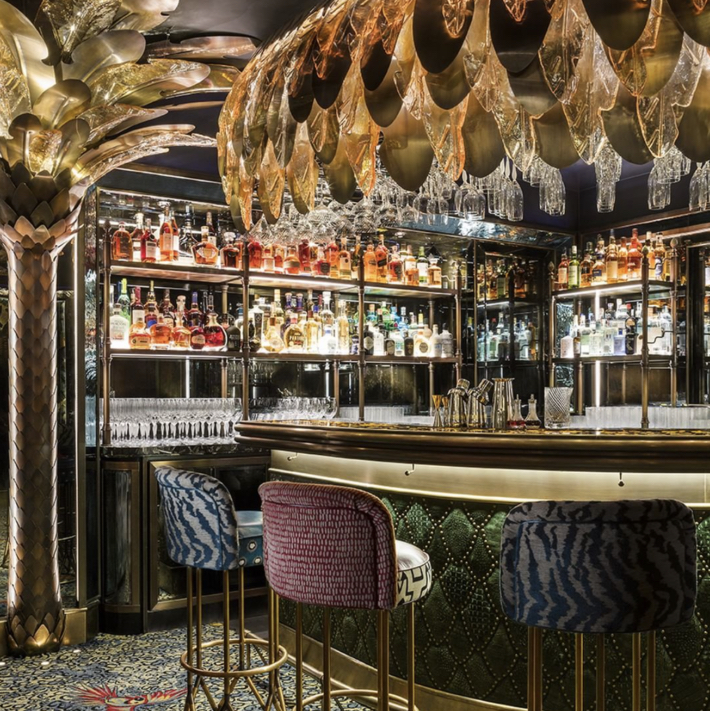 One of our favorite Martin Brudnizki interiors is The Beekman Hotel, a luxurious yet historic New York City landmark.  The building was originally designed by architectural firm Silliman & Farnsworth in 1883 and was used for a variety of functions over its life before becoming a lavish hotel. Martin Brudnizki’s design team created a lush and sophisticated space that proudly displays the beauty of the edifice while maintaining its historic patina. 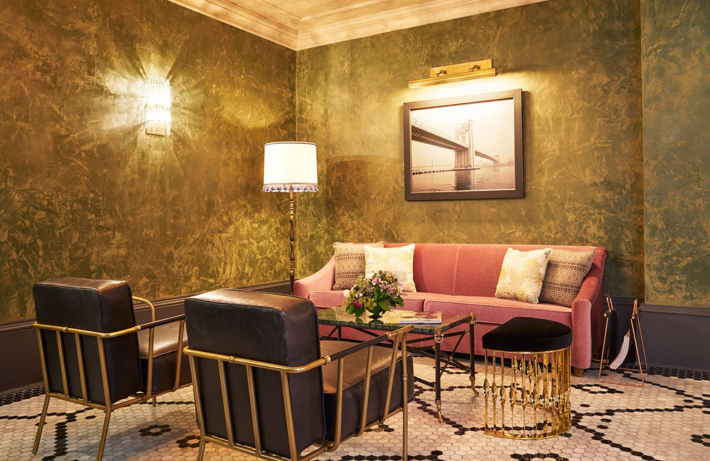 The interior’s public spaces are warm and inviting, composed of rich dark materials with accents of solid jewel-toned blocks of colorful luxury furniture in vintage pinks, greens, reds, yellows, and blues. A small-scale hexagonal black and white tile pattern and inlaid wood span the floors and topped with large antique rugs creating coziness in the sitting areas. Our personal favorite accent? KOKET’S polished brass demi-lune stool, Mandy, that adds a glamorous appeal to the sitting area where it resides alongside a romantic pink velvet sofa. 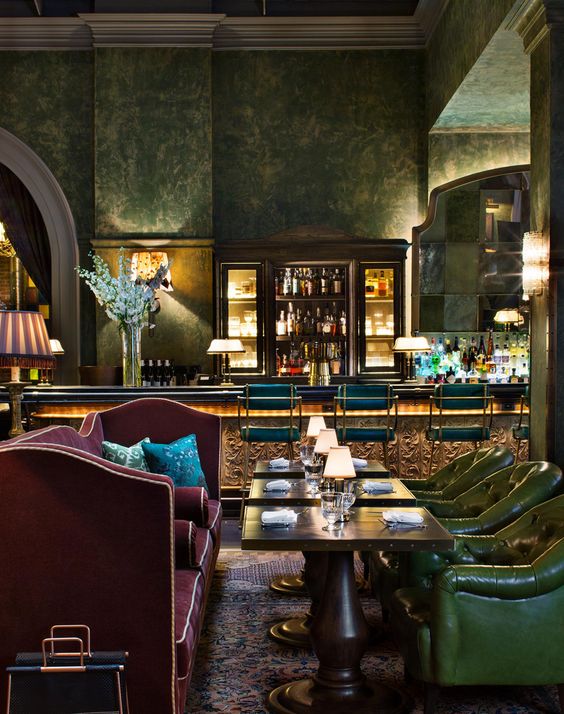 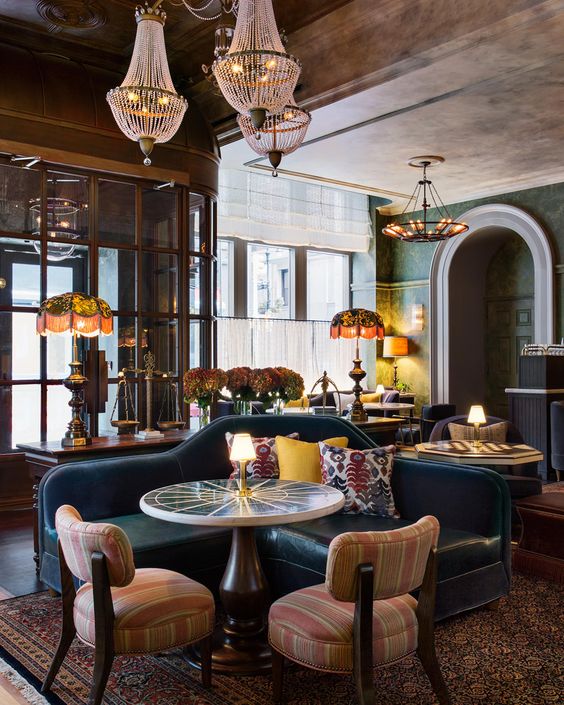 Martin Brudnizki Design Studio’s devotion to functionality and love of layering diverse materials, textures, and styles, allows them to craft an environment personal and unique to each client’s specific lifestyle. The sought-after design studio is praised for its strong commitment to the client, creating spaces for notable clients such as Rosewood Hotels and Resorts, Caprice Holdings, The Royal Academy of Arts, Nobu Matsuhisa, Mark Hix and Daniel Boulud, just to name a few. Through practice and experience, the Studio has acquired incredible proficiency in design, specializing in high-profile and luxury schemes.