The Allure of the One-Stroke Dragon: Keisuke Teshima and the Art of Hitofude Ryu 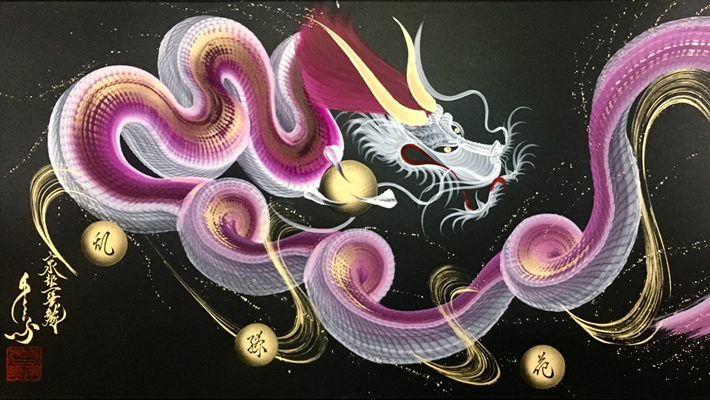 The Allure of the One-Stroke Dragon: Keisuke Teshima and the Art of Hitofude Ryu

For centuries, the Japanese culture has regarded dragons as symbols of good fortune. Most often representative of good health, prosperity and as a talisman against evil, throughout Japan’s history dragons have been worshipped for their legendary power. Thus was born a special form of sumi-e (traditional Japanese ink painting), an art form referred to as the One-Stroke Dragon technique. Fascinated by dragons since childhood, when Keisuke Teshima encountered the One-Stroke Dragon style he was immediately drawn to it. Today the Japanese artist creates beautiful, majestic and powerful One-Stroke Dragon paintings which are sold around the world.

Keisuke’s fascination with dragons began during his childhood while learning the spirit of the Japanese way through Karatedo. After training in traditional Buddhist art techniques, he began working as a craftsman restoring Buddhist Temples and altars in Japan. He discovered the One-Stroke Dragon style and its history and technique immediately intrigued him. In ancient time many artists mastered the art of One-Stroke Dragon and thus it was present in temples and shrines throughout Japan, but presently only a handful are still in existence. Keisuke began to study the style and mastered it in just 3 years.

The Art of Hitofude Ryu and Ippitsuryu

The tradition of this ancient art form began in the early 1600s during Japan’s Edo era. As its Japanese name infers, ippitsuryu (translated as ippitsu: a few lines, stroke of pen; ryu: dragon) or hitofude ryu (hitrofude: one stroke; ryu: dragon), the technique uses as few strokes as possible to create a dragon.
Often passed from generation to generation, this form of sumi-e painting uses an ink wash and brush, similar to calligraphy. The focus of this art form is on the beauty of the brushstroke. Keisuke begins with small single strokes to create the dragon’s head. Then by varying pressure and brush position, never lifting from the page, the scales of the dragon’s torso take form as he moves his hand with incredible precision and patience. He then adds small details at the end to complete the work of art. Watch the beauty unfold!

The Power of a One-Stroke Dragon

The majesty of the single brushstroke of the One-Stroke Dragon art form is believed to capture the spirit of the dragon it portrays and bring luck and good fortune to those who own the finished painting. Often customer’s commission custom dragons in which the artist adds personalized characters called bonji that represent a particular god related to the customer’s needs. For example the bonji of a healing god to bring better health. An upward-facing dragon is proud and symbolizes ambition, while downward-facing dragons are praying and act as a guardian offering protection.

The tradition and spirit of the One-Stroke Dragon style are embodied with contemporary ideals in each of Keisuke’s paintings. All of his One-Stroke Dragon’s are accented with lighting and rain representing the cultural belief that dragons, through the power of lighting, have the strength to bring water for abundant rice crops. On his site, Keisuke notes the importance of rice in Japan as the reason behind his use of these elements. He writes, “Rice is Japan’s lifeline and in the DNA of everyone.”

Keisuke held his first solo exhibition in 2014 in Ginza. After his debut show, he toured the US sharing this traditional art form and his amazing talent through exhibitions and performances at 13 venues across the country. Currently, Keisuke lives in Kyoto, Japan where he has his own gallery. To see more of his beautiful work visit him online at onestrokedragon.jp! And be sure to follow him on Instagram at @onestrokedragon!

All Photos Courtesy of Keisuke Teshima