The Elegance of Straw Marquetry with Lison de Caunes 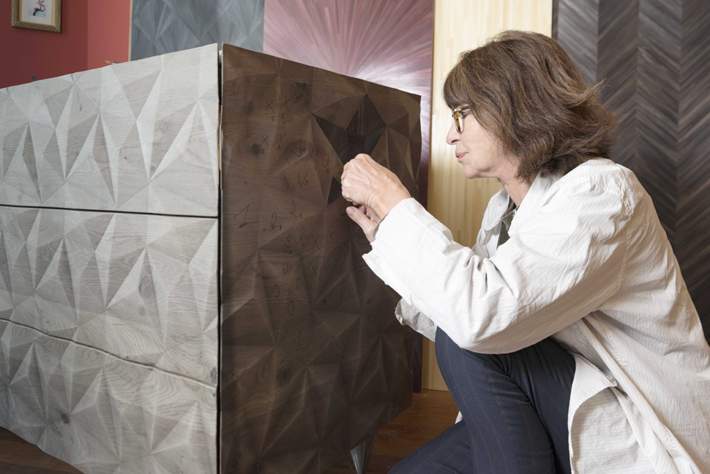 Meet Lison de Caunes, an exceptionally talented French artisan breathing life back into the traditional art of straw marquetry​. Lison’s works are delicately crafted—with​ coloring ranging from straw’s natural color to beautiful jewel tones. Each work of art contains stunning visual interest in the variation between the lines of individual straw. Overall, the pieces are exquisite to behold.

Inspired by her grandfather, André Groult, one of the most influential designers in the Art Deco style, Lison de Caunes sought to follow his footsteps. Her goal was to make this forgotten craft fashionable again. In the 1970s, Lison began her quest to show that straw marquetry could be affiliated with contemporary designs and interiors. As the only person working in straw marquetry for the last twenty years, Lison is delighted to see the technique rising in popularity.

After completing her studies at the Union Centrale des Arts Décoratifs in Paris, Lison began to cultivate her talent by restoring straw marquetry antiques and furniture from the Art Deco period.

Using rye straw cultivated and harvested in the old style from Burgundy, France, Lison begins by drying and dying it. She then opens and flattens it leaving it ready for application. This process creates a natural polish, explaining the luminous quality of her work.

Currently, Lison dedicates her time to designing furniture, wall panels, and interior decor in her personal line, Lison de Caunes Créations. Lison is a celebrated figure in the art industry. Her work has won several awards and she has worked with many prominent clients, including Patrice Nourissat, Ernest de la Torre, and Peter Marino.

We had a chance to ask Lison some questions about her career and beautiful straw marquetry creations! Read on to learn more!

Love Happens: What led you to decide to begin your career in restoration? Did this decision help shape your career today?

Lison de Caunes: I began with restoration because this is what people came to me for! It was not really a decision. Straw marquetry was not fashionable, so I focused on restoration which helped me to increase my understanding of straw marquetry. In the meantime, I was also creating small pieces of furniture for myself or my family mainly.

Love Happens: Did a particular piece created by, or moment with your grandfather that sparked your passion for straw marquetry? Or did this specialization evolve more organically?

Lison de Caunes: Straw marquetry is a childhood memory for me. I first discovered the material and the technique in my grandfather’s workshop. But I remember very clearly when I was a child in my house in Brittany, there was a big and beautiful straw marquetry screen that my grandfather had made for the Exposition des Arts Décoratifs in 1937.​ ​This piece always impressed me, so I decided to restore it after my grandfather died. It was my very first attempt with straw marquetry, and this is what made me really passionate about the material. The original screen is still with me in my workshop today!

Love Happens: When it comes to your craft, what is the most important thing you learned from your grandfather?

Lison de Caunes: Everything! From the to the patterns… When I began, I took a lot of my inspiration from his creations as well as Jean Michel Frank’s, who has been a really important figure in the renewal of straw marquetry.

Love Happens: What was your favorite project with an interior designer to date? Who was the designer and what did you create? If you have more than one favorite please feel free to share!

Lison de Caunes: The first designer who came to me for was Hubert le Gall, and I keep a very nice memory of it. Everything I did with Maria Pergay has also been very exciting, as it was very out of the ordinary and completely surprising and unexpected.

Love Happens: Walk us through the Guerlain by Peter Marino project. How long did the Guerlain project take to create? How many hands did it take?

Lison de Caunes: I was not directly in contact with Guerlain but with the interior designer Peter Marino who was in charge of redesigning the boutique. He came to me with several pattern propositions that I made in straw marquetry as prototypes. He then chose himself the one he liked the most. It took us around three months to complete and I had to hire five more people to help me work on this project.

Love Happens: I imagine the design is often a collaborative process, but please tell me more about this. Once the design is final how do you begin the creation process?

Lison de Caunes: Most of the time, designers or interior designers come to us with a project – table, cabinets, and entire rooms – that they want to be covered in straw. We then choose with them the best pattern and . We receive MDF panels or MDF pieces of furniture in our workshop in Paris where everything is made either by me or the artisans who work at the workshops. When the project is entire walls, the panels are then sent on site, installed, and we then come to do the final touch-ups and finishes.

How long do projects take on average?

Time-wise, it depends on every project, but it takes approximately four days to produce one square meter of the simplest pattern, which is vertical straw. It can go up to one week per square meter for a more complicated pattern. There are not a lot of stages. First, we need to open and flatten the straw, then we glue it on the panels and that’s it! No need to apply any varnish or finish!

For example, around ten years ago, Leila Menchari asked me to reproduce eight Hermes silk scarves in straw marquetry for the rue Saint Honoré windows of the Hermes boutique. I had to dye the straw myself, using the fish poacher in my own kitchen. The result was amazing, but it required a tremendous amount of work. I only had one month to complete the project, so I hired ten people to help me!

Love Happens: What led you to decide to launch a furniture line? Do you like this more/less/different than creating for interior designers?

Lison de Caunes: I had a lot of ideas for pieces of furniture in straw marquetry. I often found pieces in magazines that I knew would be really nice in straw marquetry, so this is why I started my own line. However, I really enjoy working with designers, as they share their expertise and vision.

Love Happens: You covered car interiors, walls, fans, textiles, furniture and beyond with your beautiful creations. Are there any surfaces you dream of covering that you have not yet had a chance to? Do you have a favorite backdrop to work with?

Lison de Caunes: The only thing I have never done so far is the interior of an aircraft. I am sure that this request will soon arrive, as we already worked on a lot of yacht interiors. We are currently testing our straw for fire resistance, which is one of the main issues when working on aircraft interiors.

Love Happens: I you offer a traineeship program – can you tell me about why you started this? Do you find it hard to find employees skilled in marquetry? Are you looking to preserve the craft?

Lison de Caunes: The traineeships are really for amateurs with an interest in learning for their own behalf. I started it because I had a lot of requests!

A few years ago it was very hard to find skilled employees, so I always trained them in my workshops. Today, a lot of craft schools teach straw marquetry making skilled people easier to find.

Preserving this craft has always been one of the most important aspects of my career, and I am very proud today to see that straw marquetry has regained a lot of interest all over the world.

Love Happens: Do you have any plans for the future of your business or for future collaborations that you would like to share? Any dreams?

Lison de Caunes: I can’t really say anything about upcoming projects because they are confidential until they are released, but I can disclose that I will be presenting a piece at Salone del Mobile in Milan.