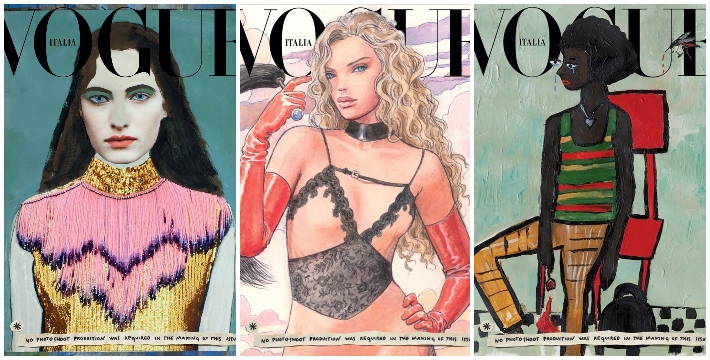 The Vogue Italia January 2020 edition will not include any photographs. Yes, you read that right! In an effort to draw attention to the environmental impact of producing a glossy print magazine and show its support for sustainable fashion, the publication opted for a photo-free approach.

So, what did Vogus Italia put in place of its usual extravagant fashion shoots with models, photographers, makeup artists, and stylists? Editor Emanuele Farneti chose to use illustrations. Stating that he hopes to demonstrate this alternate and much more sustainable way for the fashion industry to showcase clothing.

The Vogue Italia January 2020 edition includes seven unique illustrated covers. Each displaying a message reading: “No photoshoot production was required for the making of this issue”. Further, all the features are photo-free as well.

Imagine the environmental impact of 20 flights, a dozen trains rides, 60 international shipments, 40 cars on standby, at least ten hours of studio lighting, and heaping piles of waste. According to Emanuele Farneti, this is what went into the production of the September 2019 issue of Vogue Italia!

Now imagine the impact of the January 2020 issue’s seven distinct cover illustrations and all its features, entirely produced without photoshoots or international shipments.

“Change is difficult, but how can we ask others to do it, if we don’t question ourselves?” he wrote. “So this month we wanted to send a message: that creativity – a pillar of Vogue for almost 130 years – can, and must, make us explore different paths.”

Emanuele Farneti first declared his dedication to preserving our planet for future generations in a December 2019 statement made jointly along with 25 other Vogue editors around the world. This statement further solidifies Vogue’s publisher Conde Nast’s commitment to doing its part, a commitment they first initiated earlier in 2019 when they signed up to the UN’s Fashion Industry Charter for Climate Action. The Vogue Italia January 2020 issue definitely stands by the brand’s promise.

Each cover features a different artist. Milo Manara, one of the artists, spoke about his artwork showcasing a lace gown with a narrow GG belt detail from the Gucci Spring Summer 2020 collection: “For my cover I referenced the greatest of models, Michelangelo’s David, but in female form. I wanted to recreate the same pose, the quiet pride of the victor, which is the attitude that represents femininity in our times despite male resistance”.