The Birth of Venus: Masterpiece of the Renaissance Era 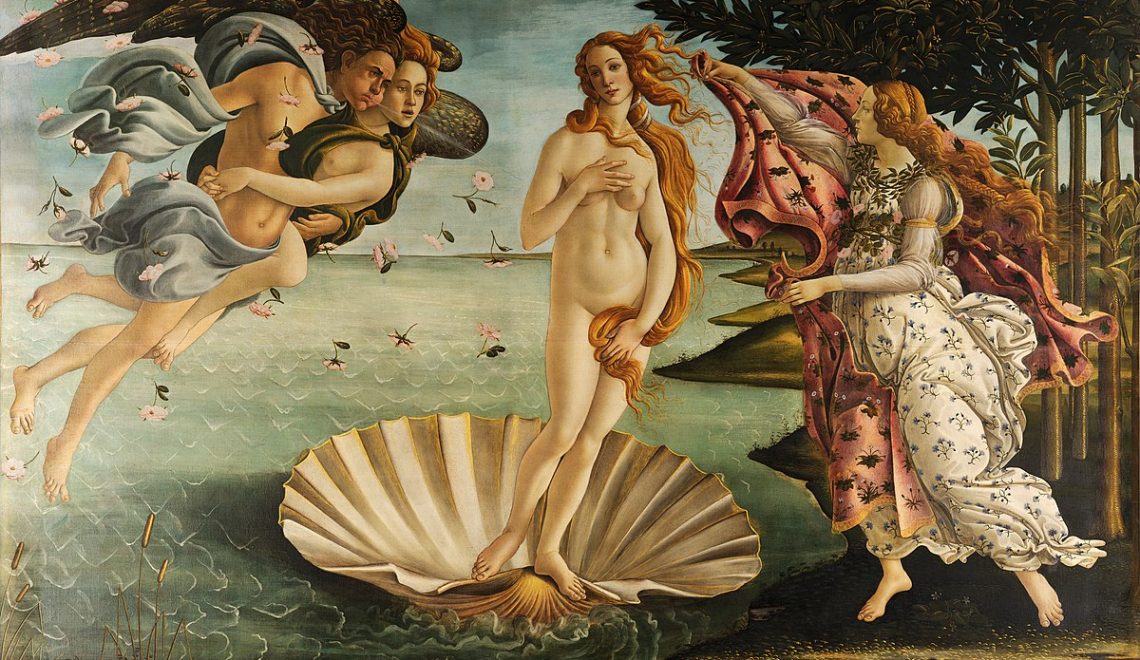 The history of humankind itself is evidence of the portrayal of human love for aesthetic objects derived from imagination. And painting is one of the most serene media to express one’s sensuality, especially in a nude painting. One such creation is The Birth of Venus Artwork (La Nascita di Venere) by Sandro Botticelli, 1484. A stunning masterpiece currently housed at the Uffizi Gallery in Florence, home to the most magnificent collection of Renaissance art in the world.

This piece of great fascination depicts the harmony between idea and nature, heaven and prayer, and is truly elemental. Created with renaissance oil paints, this masterful work of art is a symbol of love and beauty in both spiritual as well as physical terms.

The painting represents humanistic values and a medium to get closer to the divine. Also, it has several hidden meanings which certainly pique curiosity. Therefore, we’ve master-crafted a brief guide to tell you about Boticelli’s great piece of expression by way of art.

A Celebration of Beauty and Love

‘The Birth of Venus’ is a masterpiece of the Renaissance that is flooded with allegorical references to antiquity. But the beauty of Venus—the pagan goddess of love and the main subject of the painting—never fails to amaze its audience no matter how many times they look at this magnum opus.

Beautiful Venus is completely naked on a shell on the seashore illustrating the beauty of the female anatomy. She appears with wind blowing gently upon her, caressing her lustrous blond hair with a shower of fragrant roses. On Venus’ right, you can notice the goddess’ handmaid named Ora who is all set to doll-up Venus and cover her shy body with gorgeous attire.

That’s not all! If you look closely you will observe a dark line around the contours of Venus’ body. This not only highlights her flawless and envious milky skin but also the bodily form against the painting’s backdrop. This gives the illusion that her flesh is made out of marble and underscores the immaculate sculpturesque nature of her body.

‘The Birth of Venus’ is a work of tempera on canvas instead of the popular wood panels during the Early Renaissance. It might surprise you that this artwork is not just magnificent to look at but also colossal measuring roughly 6 feet by feet. So, it’s no brain drainer that this artwork is lauded as the first large-scale canvas created in Renaissance Florence. Let us now delve into the mythological references in this masterpiece by Botticelli.

Botticelli’s painting emerged as an early work on canvas. The subject who is the goddess Venus stands on a sea shell that appears as though it is emerging out of the ocean. To the left of Venus, the wind god Zephyr holds a woman (thought to be Aura, the personification of a lighter breeze) tightly. And to her right is a woman, the Hora of Spring, a minor goddess. The three hail the arrival of Venus in their flowing garments. This Florentine painting gives a powerful message that the goddess has arrived like a blooming flower just as the ones flowing through the picture.

Neoplatonic thought was the inspiration behind the stunning artwork. Botticelli followed a trend to please his patrons by speaking the language of the culture. Venus’s beauty was shown as a way to adore the human spirit and find a clear path to the divine. It symbolizes that spiritual beauty is often found when one chooses to admire physical beauty.

Venus on a shell is ravishingly beautiful with her reddish-blonde hair. Though her skin is pale, she looks flawlessly gorgeous. She covers her genitals, prompting a message that the physical beauty of a female body is one of the purest forms of love.

A women’s beauty means grace that can, without any doubt, have the incomparable power to win the world. It represents the nobility of spirit. Don’t you find the idea of hanging such a silently speaking beauty on the wall of your home mesmerizing?

Tips for Displaying Your Artwork

Just as what is happening around us inspires us, similarly, Simonetta Cattaneo Vespucci, one of the most beautiful women in Florence during this time, enchanted Sandro Botticelli. And clearly more than a muse for Botticelli, as he painted Simonetta for nine years even after her demise. The painted was also buried next to her, a symbol that the essence of love never dies even after death.

Unspoken Power of ‘The Birth of Venus’

Gazing at the beautiful Birth of Venus by Sandro Botticelli is a sure way to escape from everyday stress and boredom. A simple artistic medicine to cure life’s tensions. Improve the power of your imagination by feeding your mind with positivity. In fact, art actually can act as a fantastic medium to boost productivity. How about changing your life with just a piece of historical imagination?