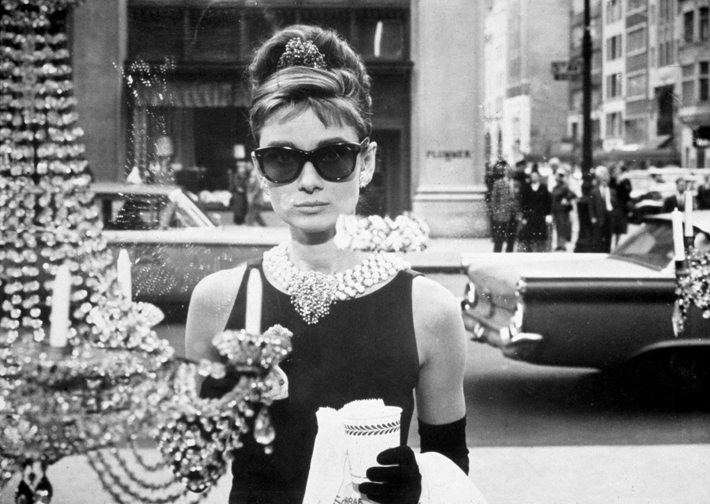 At Lh, we love iconic design so today we are celebrating iconic fashion! From accessories to clothing, fashion lovers around the globe adore these 20 iconic fashion pieces. Each piece is timeless in its design, recognizable in its style, and a fabulous wardrobe investment!

In February 1955, Gabrielle Chanel created a singular rectangular shaped handbag. Clothed in a quilted texture inspired by her love for the equestrian spirit and with a signature flat metal chain. Since then, season after season, Chanel reimagines this iconic piece of fashion. With new colors and fabrics, the 2.55 remains simultaneously timeless and trendy.

Christian Louboutin’s red-bottoms take the cake when it comes to recognizable shoe designs. Ever wonder where the idea for the red-bottom came from? The story goes that one day a prototype of a shoe inspired by Andy Warhol’s ‘Flowers’ arrived at Louboutin’s shop. Finding the design slightly dull and noticing the bright red nail polish his assistant was using at the time, he took the polish and began to paint the boring black soles. And thus the signature red-bottom was born!

Identifiable by its two sleek intertwined Gs set on a band of Italian leather, the Gucci logo belt is definitely one of the most iconic fashion pieces. Gucci’s double Gs logo first came to be in 1933 when Aldo, the son of the brand’s founder Guccio Gucci, crafted it from his father’s initials. In the 1970s the trend for statement logos began to grow. Followed by the logo-mania of the 2000s. While the trend for logo-bedecked clothes is no longer “mania” status, designs like the classic Gucci logo belt aren’t going anywhere.

Born in the early ’90s by renowned fashion designer Hervé Léger, the bandage dress was one of the defining styles of the decade. Formed from dozens of elasticated bandage-style strips of knitted cloth, the iconic dress creates a body-sculpting, skintight silhouette. In 1998 the BCBG Max Azria Group acquired the Hervé Léger name and the famous silhouette.

Since the late 19th century the iconic French fashion house, Louis Vuitton, has been designing handbags and luggage, including the brand’s iconic time-honored trunks. Upon launching his career Louis Vuitton set out to create beautifully crafted, durable luggage. And what better way to look stylish while traveling than with an iconic fashion piece like LV’s Keepall.

Perhaps a fashion faux-pas to some, the UGG boot will absolutely go down in history as an iconic piece of fashion. Inspired by the sheepskin boots worn by sheep shearers in the early 1920s, the style first became popular in the 1970s with Australian surfers. UGG brand founders saw the trend and decided to form a company to market the boots to the California surfer scene. The UGG brand didn’t have any major breakthroughs until 1994 when the U.S. Olympic team wore the boots and they hit the international stage full force. With unparalleled comfort, a classic pair of UGG boots is a wardrobe staple.

Established in 1981 by the Marciano brothers, who left France in pursuit of the American dream, GUESS redefined denim in the US. One of their initial iconic designs was a stonewashed, slim-fitting jean, the 3-zip Marilyn. Inspired by Marilyn Monroe, the high-waste slim-fit ankle-length jeans became a cash cow for the brand and an iconic 80s garment. Through ad campaigns featuring women, with real pin-up curves like Marylin’s, such as Claudia Schiffer in the 80s and Anna Nicole Smith in the 90s, GUESS quickly became a symbol of a young, sexy, and adventurous lifestyle. Most recently GUESS collaborated with Jennifer Lopez on yet another iconic ad campaign.

Introduced in 1969, the Return to Tiffany® key ring is one of Tiffany’s most iconic designs. Inscribed on each piece is the phrase, “Please Return to Tiffany & Co. New York” and a unique registration number ensuring that if lost, they would be reunited at the Fifth Avenue flagship store. The Return to Tiffany® motif evolved to include the heart tag bracelet, as well as rings, pendants, and earrings, all engraved with the famous phrase.

There is nothing quite as iconic as a classic Chanel tweed piece, whether a jacket, skirt, or full suit. Coco Chanel realized the comfortable, suppleness of tweed after borrowing sportswear from her then-boyfriend, the Duke of Westminster. Deciding it would lend itself well to her designs, in 1924 Chanel enlisted a Scottish factory to produce her iconic tweed fabrics. One of the first tweed designs Chanel launched was a slim skirt and collarless jacket dubbed “Chanel’s uniform.” The look took off with the help of press coverage, specifically a magazine image of actress Ina Claire dressed in a Chanel suit printed in 1924. Today, tweed remains a strong part of the Chanel story and is made in the House of Lesage out of Paris. And oh how we love a classic Chanel Tweed jacket paired with a pair of jeans!

The iconic wrap dress catapulted Diane Von Furstenberg to fame and became its own cultural phenomenon. The Belgian-American fashion designer debuted the first wrap dress in 1972 and by 1976 Diane had sold over five million. Today the wrap dress remains a staple in millions of women’s closets.

Fendi’s iconic Baguette purse came out in 1997 and is a true collector’s item today. Fendi’s Baguette was the very first ‘IT bag’ in the ’90s thanks to its role in the hit HBO series Sex and the City. Designed by Silvia Venturini Fendi, the bag’s name comes from the way it sits comfortably under the arm like a baguette of bread. Since its inception, there have been over a thousand variations, including collaborations with celebrities and artists who have designed exclusive versions of their own. Fendi’s 2012 Baguette Book pays tribute to this iconic piece!

8 of the Best Designer Bags to Invest In

English designer and icon Mary Quant became an instrumental figure in the 1960s London-based Mod and youth fashion movements. One of the designs she is most credited with popularizing is the miniskirt, a defining fashion of the 60s. Quant gave the miniskirt its name, Mini, inspired by her love for the Mini car. By promoting this fun, youthful, easy to move in fashion, she encouraged young people to be playful with their style.

The famous couturier Yves Saint Laurent, created Le Smoking Tuxedo in 1966. Designed for women it was the first of its kind to earn attention. While at first, the collection received a negative response. It later pioneered minimalist, androgynous styles for women, as well as the use of power suits and pantsuits since.

Brainchild of Italian fashion designer Valentino Clemente Garavani, the Rockstud range was developed as the accessories line of the famous Valentino brand. The first collection was unveiled in 2010. And like the signature print of Burberry, the Rockstud Valentino line is characterized by its beautiful studs. A perfect blend of style and comfort, and available in a variety of designs and colors, ranging from flats and sneakers to pencil heels, the Rockstud’s distinct style is instantly recognizable and endlessly appealing.

The Birkin bag came to be in 1984 after a chance encounter on an airplane between British actress Jane Birkin and then-CEO of Hermès Jean-Louis Dumas. After Birkin’s bag spilled, Dumas suggested she needed one with pockets. This then led to a conversation about her ideal accessory. As she recalled to The Telegraph in 2012, Birkin ended up sketching her specifications for “a handbag that is bigger than the Kelly but smaller than Serge [Gainsbourg]’s suitcase.” The rest is history as the Birkin bag played a major role in making Hermès the fashion house it is today and reigns as arguably the most iconic handbag of all time.

Although Calvin Kelin did not invent slip dresses, his ardent minimalist interpretation of the style made it an instant success after its debut in his Spring 1994 collection. Perhaps Calvin Klein’s most enduring design, the slip dress became a 90s uniform of sorts. But unlike many 90s trends, the slip dress still feels endlessly timeless thanks to its simple elegance.

Originally designed by Oliver Goldsmith in 1960, the slightly cat-eye frame of the Manhattan was made famous on Audrey Hepburn during her glamorous role as Holly Golightly in 1961’s Breakfast at Tiffany’s.
Handmade in Italy these sunglasses maintain their high-society allure today.

Cartier’s famous Love Bracelet was designed in 1969 by Aldo Cipullo for Cartier. The branded name is styled L⊝Ve for the horizontal line inside the letter “O” alluding to the bracelet’s locking mechanism. The Love bracelet is designed to only open with a special screwdriver supplied with every bracelet. The screwdriver is also available in the form of a necklace. This allows the bracelet to be “locked” onto one person, while the “key” is kept around the neck of another. Early versions of the Love Bracelet featured gold plating, while more recent designs feature solid gold or platinum. One of the most successful collections in Cartier’s history, it is most certainly an iconic fashion piece.

Since its debut in 1981, the camel coat has become synonymous with the Max Mara brand. A true fashion icon designed by French couturier Anne-Marie Beretta. The minimal yet elegant coat made of a 101801 wool and cashmere blend is built to last. Exceptionally crafted in 168 minutes with 73 individual operations. The double-breasted oversized silhouette lives on in vintage while continuing to come back year after year. Available in five timeless colors including camel, black, navy, grey, and ice white style icons like Carine Roitfeld, Jennifer Lopez, and Kim Kardashian are just some of the camel coat’s famous following. Love this iconic style? Be sure to check out the Teddy Bear edition, launched in 2013.