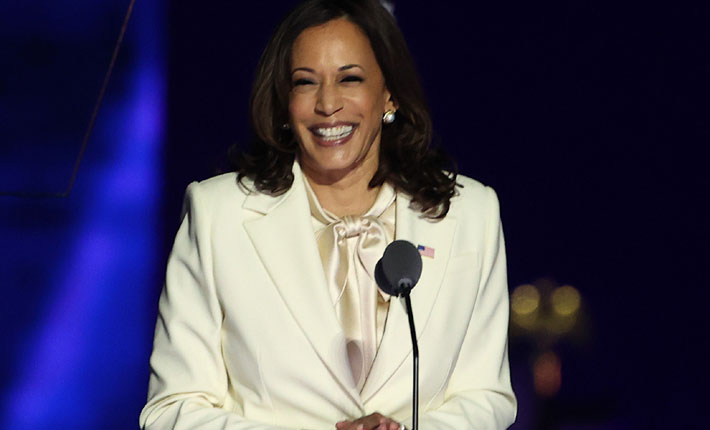 What a day for women! When I set out to write this article I planned on a piece about women empowering women. The satisfaction of seeing a woman rise in a sea of men. And not just any woman, a multiracial woman! But then I read the transcript of the speech Vice President-elect Kamala Harris delivered to the nation on November 7th, 2020. It instantly became clear what I really needed to share. Kamala’s own words. So we can all hear them again, feel her power, and be inspired. So we can teach young women to always believe and reach for the stars. Cheers to girl power! And cheers to all gender and racial equality!

After beginning with a quote by the late Congressman John Lewis: “Democracy is not a state. It is an act.” Kamala Harris defined the meaning behind these words, “that America’s democracy is not guaranteed. It is only as strong as our willingness to fight for it. To guard it, and never take it for granted. And protecting our democracy takes struggle. It takes sacrifice. But there is joy in it, and there is progress. Because we the people have the power to build a better future.”

While democracy as a whole is the focus of these words, they easily apply specifically to gender and racial equality. We the people have the power!

Why Women Empowerment Is a “Thing”

Kamala then went on to thank campaign staff, family, friends, and the American people. She thanked her mother, the most important woman in her life. All women who helped pave the way for her. And President-elect Joe Biden, a white man who selected a multiracial woman as his Vice-president.

“And to the woman most responsible for my presence here today — my mother, Shyamala Gopalan Harris, who is always in our hearts.

When she came here from India at the age of 19, she maybe didn’t quite imagine this moment. But she believed so deeply in an America where a moment like this is possible. And so, I’m thinking about her and about the generations of women — Black women, Asian, White, Latina, Native American women who throughout our nation’s history have paved the way for this moment tonight.

Women who fought and sacrificed so much for equality, liberty, and justice for all, including the Black women, who are often, too often overlooked, but so often prove that they are the backbone of our democracy. All the women who worked to secure and protect the right to vote for over a century: 100 years ago with the 19th Amendment, 55 years ago with the Voting Rights Act, and now, in 2020, with a new generation of women in our country who cast their ballots and continued the fight for their fundamental right to vote and be heard.

Tonight, I reflect on their struggle, their determination and the strength of their vision — to see what can be, unburdened by what has been. And I stand on their shoulders. And what a testament it is to Joe’s character that he had the audacity to break one of the most substantial barriers that exists in our country and select a woman as his vice president.

But while I may be the first woman in this office, I will not be the last, because every little girl watching tonight sees that this is a country of possibilities. And to the children of our country, regardless of your gender, our country has sent you a clear message: Dream with ambition, lead with conviction, and see yourselves in a way that others may not, simply because they’ve never seen it before, but know that we will applaud you every step of the way.”

Photo Credit: Vice President-elect Kamala Harris takes the stage before President-elect Biden addresses the nation from the Chase Center November 07, 2020 in Wilmington, Delaware. After four days of counting the high volume of mail-in ballots in key battleground states due to the coronavirus pandemic, Biden won the race after a contentious election battle against incumbent Republican President Donald Trump. (Photo by Tasos Katopodis/Getty Images)