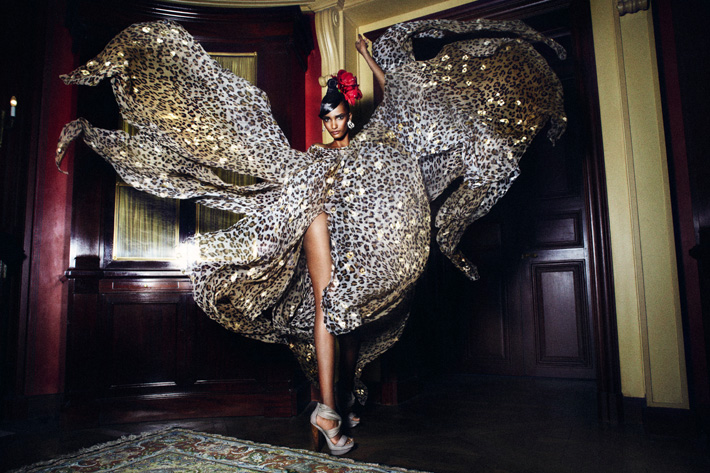 Supreme Models, the first published book to embrace iconic black women in the fashion industry, highlights inspiring models of the past such as Tyra Banks and Naomi Campbell, as well as influential models from current times. Although their careers may be portrayed as a fantasy we all have dreamt of at some point in our lives, in Supreme Models author Marcellas Reynolds emphasizes the importance of the obstacles these extraordinary women have faced to get where they are now.

Given our history, being a black woman in the fashion and modeling industry has not always been easy. However, with drive and motivation, the 70 influential and iconic females featured in Supreme Models continually displayed their true talents through their work. Talents that Reynolds beautifully portrays in this art book through essays, interviews, and an array of photographs that capture their most memorable career moments, while celebrating their monumental impact. The book’s cover alone speaks volumes!

Supreme Models: Iconic Black Women Who Revolutionized Fashion written by Marcellas Reynolds and published by Harry N. Abrams is a remarkable book exhibiting photographs from magazines to runway shows and editorials. In the duration of its 256 – 9.5 x 1.05 x 12.35 pages, Reynolds sets forth euphoric images alongside inspiring text, at once capturing the reader’s attention. Essence calls Supreme Models “The #1 fashion book to read about black style.”

Magazine covers such as the one above displayed in Reynolds’ Supreme Models art book depict some of history’s iconic moments. Beverly Johnson was the first black woman ever to be on the cover of a Vogue Magazine.

On Our Shelf | Vital Voices: 100 Women Using Their Power to Empower

Residing in Los Angeles, California, author Marcellas Reynolds is an actor, fashion stylist as well as an entertainment reporter. His inspiration behind creating this book originated from these iconic supermodels that have shaped the industry.

On the front cover of Supreme Models is Jeneil Williams, a Jamaican model who first competed in track and field but stopped shortly after an injury. She then decided to become a model, which eventually led to her being one of the most influential models of our time. Williams went on to be published in the 2019 Tom Ford Beauty campaign. Her story is just one of many that Reynolds talks about in Supreme Models. It is stories like Williams’ that can inspire young individuals internationally. As they show that you can accomplish your dreams no matter what obstacles you may face.

With the under-representation of black models throughout history, it is essential for the fashion industry to acknowledge true talent. Beverly Johnson, Tyra Banks, Jeneil Williams along with so many other iconic models, reassure the world that anything is possible. Seeing black women on magazine covers breaks racial barriers. There is no longer a specific norm when it comes to modeling. Diversity is beautiful and beneficial for anyone working within modeling. When the fashion industry shows acceptance, so many doors can be opened. Doors that were once closed for so many women across the globe. The iconic black women featured in Supreme Models show young girls and women that they don’t have to be ashamed to be their authentic selves.

A major point author Marcellas Reynolds makes is that few black models throughout history have been accepted for who they are or what their story was. Instead, their culture has been overshadowed as a trend. Supreme Models highlights all aspects of their lives. Whilst displaying alluring photographs that give insight into just how they have revolutionized fashion. An all-around must for fashion lovers!