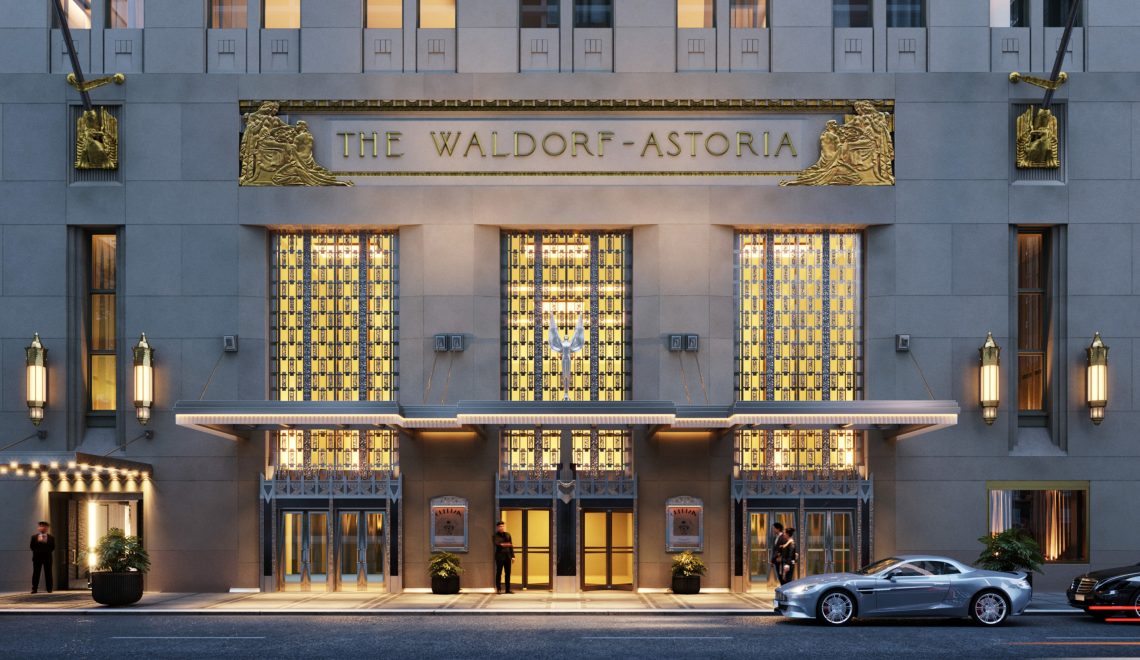 In 1893, William Waldorf Astor created the Waldorf Hotel. Then 4 years later, in 1897, his cousin, John Jacob Astor IV, created the Astoria Hotel. John was on a mission to compete with William so he built his hotel several stories higher than the Waldorf. This started a healthy competition between the two to see who could be the best of luxury hotels. Until one day the two men came to a respected armistice and decided together they could really be the best. So they connected the two grand hotels with a 300-meter corridor known as Peacock Alley. And so began the iconic history of the Waldorf Astoria name.

The union of establishments created New York City’s original Waldorf-Astoria hotel, and subsequently, the ultimate destination for the socially prominent. High-class celebrities like Princess Grace of Monaco and Ella Fitzgerald, world leaders including Queen Elizabeth II, and others from the ‘wealthy upper crust’ quickly fell in love with the Waldorf-Astoria.

In 2006, Conrad Hilton would brand a collection of hotels after the Waldorf-Astoria to include the most luxurious hotels in the world. The collection began with five properties and would grow to possess 32 more worldwide, known as the Waldorf-Astoria Hotels & Resorts. Today, bearing the iconic name of the original NYC location, the hotel brand offers some of the world’s most luxurious properties, designed by notorious architects and interior designers, set in impeccable landscapes, and offering the top of the top amenities.

Each hotel within the collection is truly mesmerizing in its own way. So, without further ado here are some of our favorite, each individually iconic, Waldorf-Astoria properties.

5 of the Most Iconic Waldorf Astoria Hotels & Resorts

“The Greatest of Them All“

The list begins with what Conrad Hilton has deemed “The greatest of them all”–Waldorf Astoria New York. Architects Leonard Schultze and S. Fullerton Weaver designed the hotel in 1931. This iconic flagship hotel is one of the first five properties in The Waldorf-Astoria Collection. It truly captures and reflects the beauty of New York City, so much so that it is currently under renovation to masterfully honor New York’s standards. One of the highly anticipated restorations is the Grand Ballroom. In the newly imagined space, architecture firm Skidmore, Owings & Merrill honor the hotel’s history as it restores the original 1931 design. We are anxiously awaiting the re-opening of the midtown Manhattan icon in 2023!

Want to make the Waldorf Astoria your all the time home in NYC? Check out The Towers!

“The Jewel of the Desert”

There’s a reason why the Arizona Biltmore is called “The jewel of the desert”. This beautiful title was earned for its pioneering designs by Albert Chase McArthur who studied under designer, Frank Lloyd Wright in 1929. Fast forward to 2021, and the newly renovated Arizona Biltmore further upscales the hotel’s chic allure. Virserius Studio, PHX Architecture, and Jim Smith of Serving the Nation, Inc.–all Frank Lloyd Wright admirers–were purposefully commissioned for this 15-month project to meticulously restore, repair, and celebrate the Arizona Biltmore’s iconic legacy while reimagining the luxurious guest experience for a new era. The beautiful property stretches effortlessly for 39 acres, offering guests seven pools, an award-winning spa, and lush gardens surrounded by mountains. It is impossible to resist this oasis of a hotel, even Marilyn Monroe was known to sunbathe at the edge of the Catalina Pool back in 1930.

When it first opened in 1991, Grand Wailea was known as the Grand Hyatt Wailea. The hotel’s builder Takeshi Sekiguchi then sold the resort in 1998. Eventually, it would become one of the first hotels to join Hilton’s Waldorf-Astoria Hotels & Resorts in 2006. Today, Grand Wailea is famous for its beauty and amenities such as the first water elevator, the first rotating barrel pipe ride, and the largest spa in Hawaii—Mohalu Spa Grande. The Grand Wailea has hosted celebrities like Oprah Winfrey, Steve Carell, and Magic Johnson. It was also the filming location for the 2011 movie Just Go With It starring Adam Sandler and Jennifer Aniston.

“The Palace of Palaces”

In 2014, the Waldorf Astoria Amsterdam became the 25th hotel in the brand’s collection. Located on the UNESCO-protected Gentlemen’s Canal, the hotel spreads across six 17th- and 18th-century palaces originally designed by Louis XIV’s architect, Daniel Marot. The magnificent design is instantly iconic as it appreciates the history of Amsterdam’s architecture, while respectfully modernizing the interior. Further, the floor-to-ceiling windows invite the history of Amsterdam’s Herengracht inside, allowing the beauty to transcend from its past. Intimate luxury within its 93 rooms, a Guerlain Spa, and an unforgettable dining experience await your arrival!

Henry Flagler promised Key West a luxury resort hotel back in 1912. So, in 1920 he built Casa Marina to serve and host the travelers of his Overseas Railroad. Ever since its inception, the hotel has been a part of great moments of American history. Casa Marina served as an officer’s quarters during World War II, home to the U.S. Army’s Sixth Missile Battalion during the Cuban Missile Crisis, and host to 300 volunteers for the new Peace Corp training. Thomas Hastings and John M. Carrere designed the hotel that became even more legendary when it converted to the iconic Waldorf-Astoria brand in 2009.

10 of the Most Beautiful Hotels of the 21st Century
Unique Airbnb Travel Destinations, Let Your Escapism Fantasies Unfold!