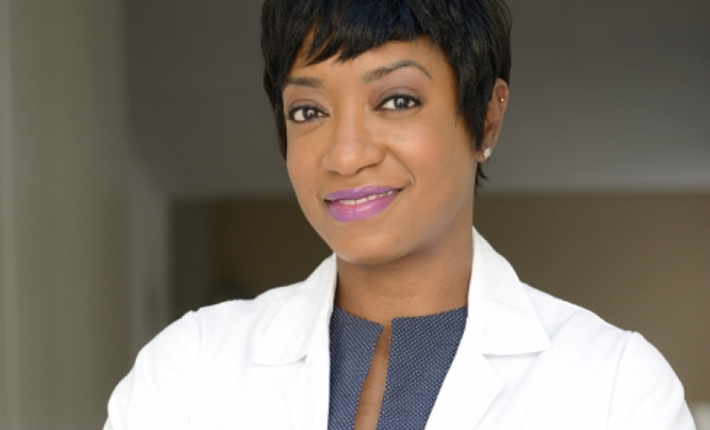 Janet Morais: The tagline for KOKET is “love happens”. I am a ﬁrm believer that you cannot achieve any level of success without love. When did your love affair with health care begin? And how did it make you feel?

Janese Laster: My love affair actually began quite early. Apparently, I declared to my parents at age 4 that I would become a doctor. I first remembered my curiosity and love of the human body at age 5 when I questioned my mother provided me with Acetaminophen one week for a headache and weeks later for an inflammatory leg pain…I asked, wait when I swallow the pill, how will it know which way to go? My mom was an advertising executive and still hates when I tell the details of some of my procedures. As you can imagine, her response was, we’ll have to look that one up! From then on, I always found myself gravitating to medical shows, books, and extracurricular activities.

Janet: What led to your decision to start Gut Theory?

Janese: The idea initially began during my gastroenterology fellowship training when I realized there was a large subset of the population whose risk of mortality continued to increase due to excess weight. Many of the patients we saw had almost identical patient profiles and complaints—nausea, vomiting, bloating, constipation, heartburn, abdominal pain along with hypertension, diabetes, high cholesterol, and fatty liver to name a few.

After multitudes of negative tests and labs, the answer always boiled down to diet. However, in a typical fast-paced general Gastroenterology practice there is no time allotted to explain food, the differences between minimally processed and ultra-processed foods, food labels, portion sizes, the pathophysiology of obesity, or the consequences of long term excess weight and metabolic syndrome. I felt I wasn’t truly helping patients reach their maximum potential, and that there had to be a better way! Gut Theory was born out of this desire and need.

Janet: In the shortest form possible, why is gut health so important?

Janese: Simply put, gut health corresponds to overall health. It’s a complex interplay of all the microorganisms that live with us in the gut, appropriate digestion, along with the interplay of the gut-brain axis altering mood, and the relationship to metabolic syndromes such as insulin sensitivity, hypertension, diabetes, high cholesterol. These are all affected by gut health.

Janet: Can you share any secrets or key tips for optimizing gut health?

Janese: Some of the “secrets”, seem so easy that people can’t believe they work–adequate sleep of at least 7-8 hours per night, drinking plenty of water (and avoiding soda and juice), and increasing fiber intake via whole fruit and vegetables. We get too busy with life, it’s alarming how few of us do these simple things daily.

“I like to think that I empower women the same way I empower myself. It’s super cheesy, but knowledge really is power.“

Janet: What empowers you?

Janese: Knowledge empowers me. Each step of my training has been sought out due to curiosity and the desire to attain a deeper understanding of the universal human life cycle and all that it entails. Each day I strive to become a better version of myself and with my training, I’m able to pass this along to my patients, students, fellows, and the community.

Janet: How do you empower other women?

Janese: I like to think that I empower women the same way I empower myself. It’s super cheesy, but knowledge really is power. For example, I explain some of the pathophysiology of weight gain and hunger to my patients so that they understand what is happening in their bodies. This allows for some semblance of control and an ability to overcome particular patterns to achieve set goals.

Janet: Who is Janese Laster the Woman?

Janese: That’s a tough one because while I stay the same, I’m ever evolving in my thinking. However, I don’t fit nicely into any particular boxes that most people try to assign me to. I was once called, a walking contradiction which I thought was rude initially. But I later realized what was meant. I’m an introverted nerd, who somehow attracts conversation with strangers so is thought to be extroverted. But really just a southern girl at heart. I’m a physician, who hates mornings despite years of early risings. I love shoes and purses, but would watch football every day if I could. I love my family and friends and I’m very protective of them.

Janet: Who is Janese Laster the founder of Gut Theory?

Janese Laster, the founder of Gut theory wants to take on the world and change how we approach medicine with goals of preventing obesity, and obesity-related complications such as diabetes, hypertension, hyperlipidemia, fatty liver, Gerd, cerebrovascular and cardiovascular disease to name a few. I want to change mindsets and relationships with food overall. To reduce food desserts and create affordable food sources. I want physical activity to be a norm. And I want to make vegetables and fruits cool again and reduce our dependence on ultra-processed foods. Lofty goals, but achievable one patient, lecture, and article at a time. I know we can get there!

Janet: What three pieces of advice would you give to a young woman starting her career?

Janet: Do you have any mottos you live by?

Janese: My grandmother always said, “What’s for you is for you”. This keeps me going and believing in myself and lofty goals!

Janese: Next up is continuing to expand Gut Theory to incorporate fitness, yoga, and counseling. I’m co-editing a new textbook in Nutrition that should be wrapping up soon. I’ve also co-created a Nutrition course for Gastroenterology fellows to learn more about incorporating these life skills into daily practice, since it isn’t routinely taught. And working more with the community on nutrition and health literacy.