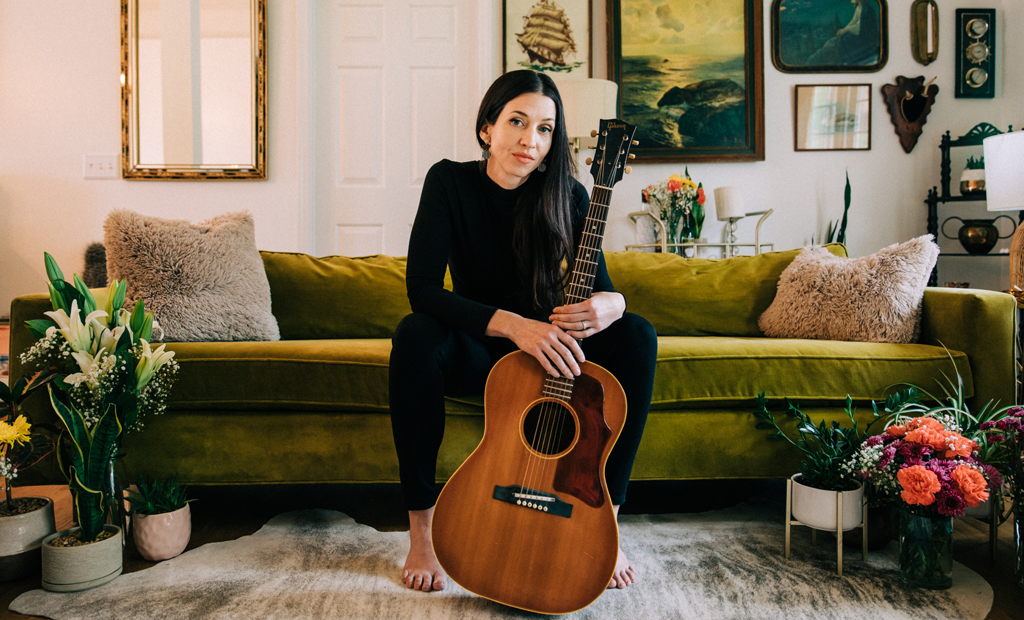 In this edition of Empowered Women Empower, join us for a peek inside the inspiring world of Angela Soffe, award-winning American artist, and women’s rights activist. Angela Soffe is best known for her piercing lyrics and anthemic, yet intimate songwriting. In addition to empowering through her music, Angela is also the founder of Heroica, a brand dedicated to teaching women how to step into their true identity and live out their creative dreams.

Raised in Asia, and now based in Washington state, Angela Soffe’s songs are morsels of real-life wrapped in honest Americana.

With a sound she describes as “timeless Americana pop,” Angela won the nomination for “Americana Album of the Year” by the Independent Music Awards 2019. Her song, “Rocks” also won the Great American Songwriting Contest in 2019.

After the success of “Rocks”, Angela debuted a romantic piano ballad titled “Bloom.” A beautiful song spotlighting her sweet and soaring vocals, “Bloom” is about “a collective and personal awakening to what matters most—the people in our lives.” Selected as the first release for her upcoming 9-track record, “Bloom” sets the tone for what the rest of the songs on the record are about, “thriving amid hardship.”

“Bloom” is currently available on all streaming platforms including Spotify, Apple Music, and more. Or check out the official music video.

Angela’s work and story have been featured on independent films, commercials, and podcasts worldwide. Further, she has performed at notable venues and works with top industry talent. With her motivation, fresh demeanor along with her effortlessly long-held notes, Angela exudes confidence and is born for stardom!

Read on to get to know Angela and her music, and be empowered!

Love Happens: As our name, and the tagline of our publisher KOKET denotes, at ‘Love Happens’ we are firm believers that you cannot achieve any level of success without love. When did your love affair with hair care begin? And how did it make you feel?

Angela Soffe: Love affair—what a great description. I couldn’t agree more! My earliest memory of music was a tape my Dad owned of Simon and Garfunkel. I memorized every word from every song, even though I couldn’t read the lyrics yet on the insert paper. Something about the harmonies, the simple melodies, just made me melt into it.

Soon I was “in love” with my older sister’s piano book and I’d watch her lessons and copy what her teacher said, so I could practice it too. (I think that’s when my mom signed me up for my own lessons, thanks mom! 🙂

It sounds cliché, but since those early encounters, I’ve been in love with music for literally as long as I can remember. It has this ethereal power to instantly take me to some other place and I’m completely sucked in for those 3-4 minutes of a song. Whether it’s performing my own music or listening to another artist, it’s still my favorite way to turn off the noise of the world. My love for music feels like a relationship I’ve built with something beyond myself that’s very powerful, majestic, and who speaks in ways that words just can’t. For me, it’s healing and grounding, but also a spiritual modality at the same time. Definitely an Affair to Remember. 😉

Lh: What empowers you?

Angela: I grew up in metropolitan Manila, Philippines, surrounded by extreme poverty. Outside the wall of my neighborhood were street children sniffing glue under the overpass to keep from going hungry. On the way to and from school, I saw them, and they saw me. I was powerless to do anything, but couldn’t look away. It was a daily reminder of life’s inequalities.

So today, I’m empowered by innovations and creations that make our world a little better. I’m energized by the creative magic that flows around us in every invention, painting, song, and social solution. Witnessing creative inspiration empowers me like crazy because I see it working to bring smiles to all our faces. We have the ability to synthesize ideas and information, and then put it out in the world in an entirely unique way, every single time. The positive products and expressions we create are literally lifting us all, and I think it all matters. Especially in a pandemic-afflicted world, I can’t think of a better time to create and elevate. It’s the reason I make music to share, hoping it impacts someone’s life for the better.

Lh: What do you consider your greatest achievement?

Angela: Genuine happiness! Being happy and my authentic wellbeing is something I’ve worked hard to guard and cultivate. I’ve achieved awards, climbed mountains, raised babies, and other milestones that I’m really proud to be a part of. However, I’m most proud of owning my life and joy. In 2014 I made the extremely difficult decision to leave the religion of my heritage. It came with an enormous social and emotional cost, but the result was an awakening that has changed my whole life for the better. I’m more self-aware, authentic, and have courage to tell the truth. The chance to see life through a new lens, and living consciously is the greatest gift, and I consider it my greatest accomplishment.

Lh: Who is Angela Soffe the Woman?

Angela: I like to think she’s a soft pink velour pillow with sequins on one side—the kind that sparkles but you feel comfortable sitting with for a long while. 😉 Or a hot cup of tea that’s strong and mild at the same time.

I come from a long line of strong Mormon pioneer women and a mixed cultural heritage with many languages at home. Pair that with growing up in Asia, and my foundation was extremely eclectic. I fit in everywhere but was never really at home anywhere. This has made me into a compassionate, curious woman who sees more possibilities than limits. Life and this planet are my beautiful playground. I love to explore. I’m into palm trees, tropical foods, raising animals, being a mother, a lover, talking to new people, traveling, asking why, collecting people’s stories, creating things, growing wiser, and loving people along the way.

Lh: Who is Angela Soffe the Musician?

Angela: As a musician, she’s like a curious child. She’s always listening to the sonic voice of inspiration. Melodies and lyrics come to me from some invisible river that’s always flowing. My role as a musician is to bring to life the stories and experiences that we all share, reminding us that no matter how different you think you are, we’re all human. We all want to feel like it matters that we’re here. We all feel, laugh, cry, scream, love, and remember. Music binds us together, and it’s my great honor as a musician to make music that’s a soft place to land. For this purpose of telling our stories, I’m a pianist, guitarist, melody-shaper, producer, and poet.

Lh: How do you empower other women?

Angela: After my faith transition, I awoke to some serious limiting-belief conditioning within myself. Then I saw it in the women around me, and the society as a whole. We’ve been conditioned to be small, so we don’t upset the social scenes we’re in. This smallness is presented as fake humility and doesn’t benefit anyone in the long run. I wish women knew just how powerful they truly are.

I wrote a song that’s on the new Nashville record called, “Cherry on Top.” This song is for women who feel they’ve given their lives away to the artificial cultural norms of sacrifice and service of others. I wrote this song after asking my fans what they needed to hear. They told me about their years of sacrifice and living small, and wanted a song that reminded them of why they matter. I can’t wait for this song to reach these women. My hope is that it lifts them, empowers them, and gives them strength to stand up for what they want.

I also just launched a lifestyle brand, Heroica, that teaches creative women how to claim and go for their dreams. I teach how to have confidence, remove limiting beliefs, and finally reach their highest potential. I’m so looking forward to working with these women and mentoring them on their own paths toward their dream lives.

Lh: What three pieces of advice would you give to a young woman starting her career?

What happens to you, happens for you.

Lh: Do you have any mottos you like to live by?

Angela: So many mottos to live by! My mother’s voice still says in my head, “Find joy in the circumstances you find yourself in.” Whether you find yourself living in the heart of Brazil in a shabby house (that was me) or get your daughter’s sad diagnosis from the doctor (also me)—there’s a way to find the joy.

I repeat to my own kids “What happens to you, happens for you.” Every challenge is a gift in disguise.

Lh: What’s next for Angela Soffe?

Angela: Due to the pandemic, I had to close my teaching studio last year, shut down all the shows with my band, and pivot. These changes have been immensely positive though, I spent most of 2020/2021 making a new record in Nashville, TN.

I’m now on the heels of releasing my newest work, along with my latest single “Bloom.”

The record is inspired by the pandemic but more pointedly, the songs are micro-stories of human experience. I made this record with an all-female production team, award-winning musicians, killer creative minds, and so proud of what we’ve created. The music videos and other products will be released in the coming months!

In addition, the empowerment brand, Heroica, is making its debut in the online spaces and will be available to women worldwide. I’m so thrilled to be serving women in this way, showing them what’s possible. Watch for updates on the Heroica Instagram @thisisheroica.

50 of the Best Quotes for the Strong Independent Woman