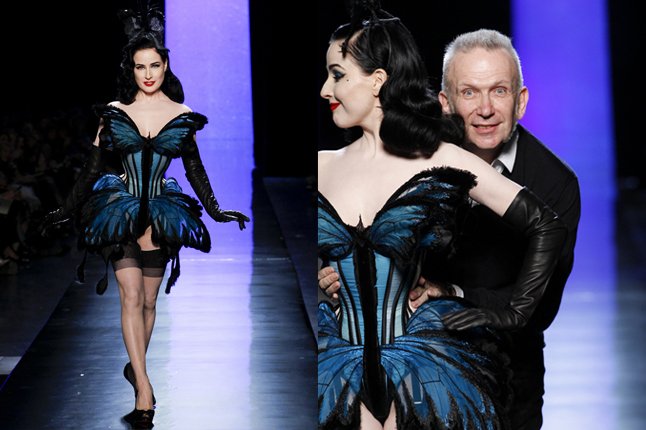 Greeted by whoops of delight, Dita Von Teese even did a turn on the runway, clad in black stockings and a winged blue and black corset by the mythic Mr. Pearl.

The story lent a sense of freedom to the collection’s color palette and forms, with the runway transforming into a butterfly house for a variety of species. Butterfly-wing lapels were used to create peak shoulders on a glamorous high-waist tuxedo; a dress in pleated plum silk fluttered with hand-rolled hems, creating a ragged effect like the edges of a butterfly’s wings; recalling the softness of a cocoon was a white, embroidered Victoriana blouse with balloon sleeves, while striking lacquered guipure pieces echoed the black veins of a butterfly’s wings.

The mood darkened as the show progressed, however, with more literal cabaret-style costumes and lingerie-inspired looks accessorized with dramatic feather headdresses, mixed in with black satin butterfly capes and flame-print dresses.

Suffice it to say the collection had wings, for, bar a handful of classics — including the marinière t-shirt, bejeweled denim vests and a net mermaid skirt with a burst of red tulle at its base — Gaultier mined his theme with the fervor of a fashion entomologist on a mission, and it proved a smart direction.

When filtered down to its core features, after all, a butterfly — like each of these creations — is all about unique beauty, an ultra slim body and bold shoulders, in other words the magic formula for the house’s couture clients.

( inspiration via BLOUIN ARTINFO  )
As from KOKET we also have a Butterfly Effect, let us present you: