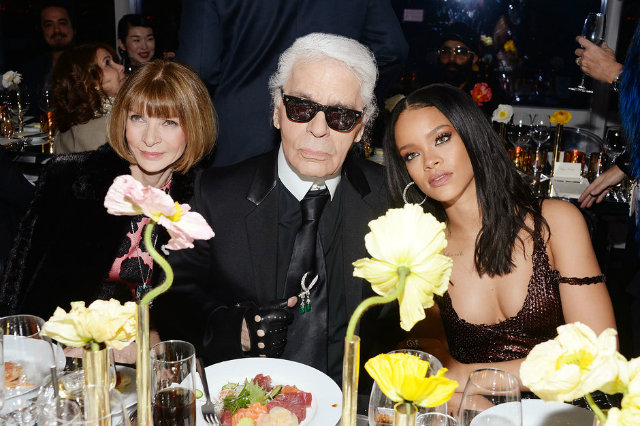 Incredible Charity Initiative – Fendi’s New 3Baguette
Friday, in a luxury condominium on the 83rd floor of the 90-story glass skyscraper 57th Street, High above New York City, a small baguette that grabbed our attention. Huge names in fashion and entertainment celebrated the opening of Fendi’s new flagship New York store on 57th Street. In fact, Fendi baguettes were being carried, talked about and gawked over all night. The party was a celebration of the launch of the Fendi 3baguette charity initiative, in which five New York women were invited to personalize a handbag.

Headliner Rihanna, who arrived toward the end of the event, in a pink fur and shiny brown dress, toting her two signature baguette designs, was one of the five leading designers behind Fendi’s 3Baguette Bag charity campaign.

Rihanna’s Baguette is true rockstar arm candy; complete with a double F pattern on the flap, a back that’s embroidered in black lurex on mink tone on tone, black velvet sides and front, a croc leather handle and the black crystal stones on the signature double F closure. Rumor has it that bidding for the Rihanna’s shiny black confection exceeded $300,000! The Barbadian beauty also designed a Micro Baguette in gunmetal silver with beaded embroidery and a chain strap. Proceeds from the sale of the bags went towards the Clara Lionel Foundation- Rihanna’s own charitable venture.

The other four women chosen to spearhead the project were Sarah Jessica Parker. The actriz from Sex and the City’s contribution is a 3Baguette adorned with a luxe purple satin, black velvet and gold galuchat flap, gold strap with a gold back. SJP’s design was undoubtedly our favorite of the bunch and its matching Micro Baguette in luscious purple satin is equally eye catching. Last we heard, bidding was in the vicinity of $30,000 for these creations and proceeds were credited to the Brain Trauma Foundation.

Rachel Feinstein drew inspiration from a Pompeii mosaic floor pattern for her 3Baguette while her Micro Baguette re imagines the portraits of Florentine Renaissance artists. Leandra Medine (known to some as the Man Repeller) decked her Baguette with Moroccan inspired embroidery while Jourdan Dunn’s Baguette paid tribute to the Jamaican flag featuring the colors yellow, green, and black. British model Jourdan Dunn, whose sleek and simple beige bag that she designed to be “fun” was an homage to her Jamaican heritage, with proceeds supporting sickle-cell disease and blogger Leandra Medine, who designed a colorful and indigenous-feeling bag.

“I’m Fendi head-to-toe. I mean, well, this is mine,” she said, pointing to her hair. “It is the only thing I don’t have to give back tonight.” Parker said that her relationship with Fendi can be traced in a straight line back to when Fendi allowed her crew to borrow a baguette for “Sex and the City.” “No one up to that point had really felt comfortable loaning us anything, and we were working with very little money and mostly shopping at thrift stores,” she said. “So for the House of Fendi to turn over a chalice like that was such a huge deal and was a gateway for other people to do the same. It was like bona fides for us.”

There’s no denying that the Fendi Baguette has a special place in the hearts of many a bold styled woman (and probably a few Sex and the City appreciating men, as well).
Proceeds from the bags (on online auction through March 13) will go to the Clara Lionel Foundation, the Brain Trauma Foundation, the Naomi Berrie Diabetes Center, the Sickle Cell Disease Association of America, and the Ovarian Cancer Research Fund.
Check out this amazing Fendi video about this charity evening:

You can make a bid for the fund here.