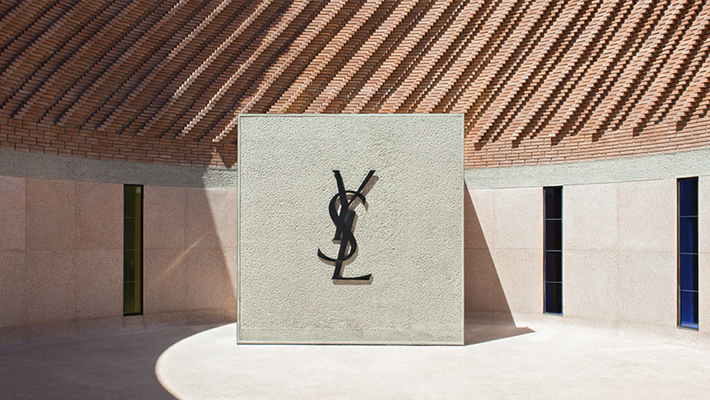 Over the course of his forty-year career Yves Saint Laurent, the shy French courtier widely considered one of the greatest designers of the 20th century, developed a wardrobe for the contemporary women of his generation – a wardrobe that not only made women feel beautiful, but also reassured them and gave them the confidence to embrace themselves.
In 2002 Yves Saint Laurent decided to “bid adieu to this profession that [he] loved so much”, his couture house held its 200th and final runway show at Paris’ Centre Pompidou and closed its doors.
Now just over fifteen years later, his legendary status is solidified with the opening of two Yves Saint Laurent museums dedicated to his work and set in the cities that inspired him most, Paris and Marrakech.
With both founders of the brand passed, Yves Saint Laurent in June of 2008 at the age of 72 and his partner in business and life Piere Bergé in September of 2017 at age 86, the Fondation Pierre Bergé – Yves Saint Laurent, has found permanent homes for the collection of unique archives to be safeguarded and shared, a task Pierre was dedicated to before his death.
A true pioneer, Yves Saint Laurent was the only fashion designer of his generation to systematically archive his work.  Beginning in 1964 shortly after the founding of his couture house he began to set aside prototypes from each collection along with the accessories used in the runway shows (jewelry, shoes, hats, etc.) for safekeeping. He also saved original sketches, atelier worksheets, concept boards, photos and videos of runway shows, client notebooks, press clippings and other documents.

The YSL foundation holdings includes over 5,000 haute couture garments from between 1962 and 2002; 65 Dior garments from when he worked as his assistant before starting YSL; ready-to-wear pieces; numerous costumes created for renowned actors and actresses; Yves Saint Laurent and Pierre Bergé’s personal archives – mostly photographs – depicting their lives beyond the couture house; and paintings including a series of portraits by Andy Warhol from 1972; and over 1000 vintage prints by some of fashion’s most talented photographers!

The two museums bearing his name share a treasure trove of allowing us to discover the creative universe of Yves Saint Laurent and reveal that he was indeed one of the greatest artists of the 20th century!

The Musée Yves Saint Laurent Paris exhibits the couturier’s body of work on the legendary premises of his former haute couture house, alternating between retrospective displays and temporary thematic exhibitions.
The Musée Yves Saint Laurent Paris’s inaugural display addresses the couturier’s creative genius through a selection of approximately fifty haute couture designs along with related accessories, sketches, photographs, and films.
The display covers all the major themes in Saint Laurent’s work, including: the most emblematic designs embodying the designer’s quintessential style, such as the tuxedo, the safari jacket, the jumpsuit, and the trench coat; his various tributes to art; and the collections inspired by his imagined journeys to such faraway places as China, Morocco, Spain, and, of course, Russia.

This truly unique display places Saint Laurent’s most well-known designs—such as the Mondrian dress and his African-inspired ensembles—alongside pieces being exhibited for the first time. The resulting dialogue between these works has been conceived specifically for the museum’s opening.
Located in the legendary hôtel particulier on 5 avenue Marceau, where Saint Laurent created his designs for nearly thirty years between 1974 and 2002, the display also explores the day-to-day life of the couture house and the creative process behind the collections. It also seeks to address the history of the twentieth century and the haute couture traditions that accompanied a way of life that no longer exists.
Scientific Direction: Aurélie Samuel, Heritage Curator, Director of Collections
Set Designer: agence NC, Nathalie Crinière
Decorator: Jacques Grange
Architecture: Jean-Michel Rousseau, DPLG architect

The first gallery is dedicated to a specific year in Yves Saint Laurent’s career, for the Inaugural Exhibit 1962, the year his first couture salon on Rue Spontini opened, has been selected.

Next to ballroom is Yves Saint Laurent’s original atelier preserved exactly as it was, appearing as if the team just stepped away for a moment.

More than just a retrospective featuring the essential work of Yves Saint Laurent – the pea coat, the Mondrian dress, ‘le smoking’ and the safari jacket – the exhibition, rooted in Marrakech, is a voyage to the heart of what influenced the designer.
Fifty pieces chosen from the collection will be displayed around themes dear to Yves Saint Laurent – Masculine-Feminine, Black, Africa and Morocco, Imaginary Voyages, Gardens and Art – offering an original interpretation of the couturier’s work using garments that, until now, have rarely been seen by the public. The garments on display will be rotated regularly, in order to ensure their conservation and to constantly revive the exhibition.

The museum is located in a new building very near the Jardin Majorelle, the garden oasis which Yves Saint Laurent and Pierre Bergé discovered during their first stay in Marrakech, saved from becoming a hotel by purchasing along with its villa in 1980 and went on to revive.

Designed by the French architectural firm, Studio KO, the museum building houses a permanent exhibition devoted to YSL and designed by Christophe Martin along with a hall for temporary exhibitions, a research library with over 5,000 volumes, a 140-seat auditorium, bookshop and terrace café.
“While studying the couturier’s archives, Studio KO became intrigued by the duality between curved and straight lines, and between loose and precise approaches to cutting fabric. The facade of the building appears as an intersection of cubes with a lace-like covering of bricks, creating patterns that recall the weft and warp of fabric. As with the lining of a couture jacket, the interior is radically different: velvety, smooth and radiant.”

For more on the latest in the world of fashion visit our Fashion page!