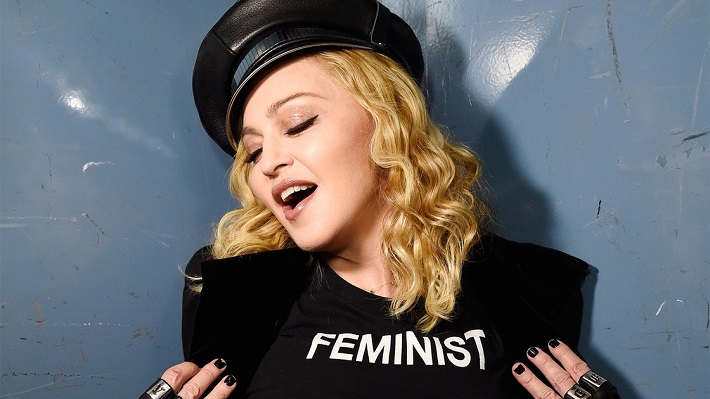 Image by Mert and Marcus.

Famously known as the Queen of Pop, this multi-talented rock star mom is a revolutionary across generations. Madonna encapsulates the idea of women empowering women, and doesn’t stop for anyone.
While her most recent work revolves around musical collaborations and celebrating feminism, Madonna’s story of fame began almost 40 years ago, when she signed a record deal at the age of 21. Her first album, Madonna, immediately gained massive attention and, just two years later, she released the iconic Like A Virgin.

With Billboard hits coming off of every album she’s released to date, Madonna is an entirely self-made success story. In fact, she is Billboard Hot 100‘s most successful solo act of all time and is considered one of the most successful musical artists, only competing with The Beatles.

But her story isn’t all about music. This controversial artist started her career with a dance scholarship to the University of Michigan, which shows through in her world tours and iconic music videos. She is known for her unapologetic sexuality, risque dancing, religiously-themed music videos and rock chick fashion style. Not only did she define 80s fashion trends through her live performances and acting gigs, but she revolutionized sexuality for women on the whole.

Many people were and still are critical of her dancing style, which often replicates explicitly sexual scenes, and her non-conservative choices, but she has simply poked fun at her criticizers in response. In her mind, there is no reason she can’t be sexy, a mom, a professional and one of the most successful women in the world.

Image by Mert and Marcus.

Between music videos, albums, collaborations, books, starring Hollywood roles and Pepsi ads, Madonna also flourished personally. She became a mother in the late 1980s — her daugher, Lourdes, is now a model — and had a clear passion for it. Even after separating from her husband, Guy Ritchie, the rock star adopted three kids and had another biological child. Her adoptive children are all from Malawi, where Madonna started a foundation that built ten schools in the impoverished country.

Despite near constant criticism, Madonna has remained a proponent of equality for women into the present, receiving the Woman of the Year award in 2016. She spoke at the Women’s March in Washington, D.C. the day after Donald Trump’s inauguration and roused a crowd with intense and controversial statements.
She now resides in Lisbon, Portugal with her younger children and continues collaborating and supporting women and artists from the other side of the world. Say hello to our friends out at the KOKET factory in Portugal, Madonna!
Check out more about Madonna’s influence in our first issue of Love Happens Magazine, premiering in print January 2018!