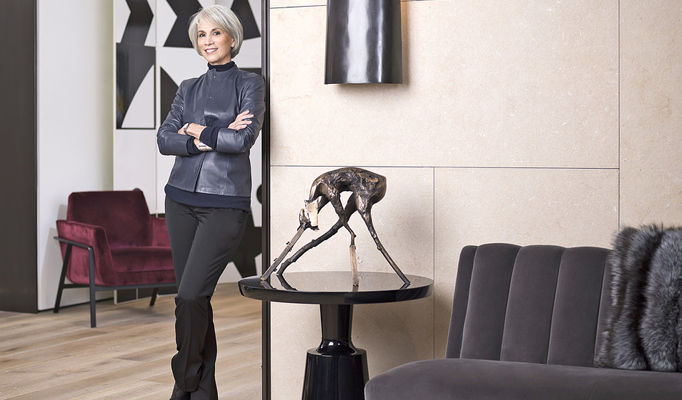 Holly Hunt is not a self-proclaimed women empowerment advocate in any sort of publicly proclaimed sense, but from a single showroom in Chicago to a multimillion-dollar home decor empire, her story is highly empowering and most certainly an inspiration to all looking for success in the world of design!

A national tastemaker and industry legend, Holly Hunt is known for her ability to spot and start style trends, for her beautifully made, elegantly tailored and ever so perfectly proportioned home decor products and her sophisticated interiors. Her namesake brand offers showrooms across the United States and in London representing an exceptional selection of designers, her own signature collections of luxury furniture, lighting and textiles, and site- and client-specific interior design projects.

Born and raised in West Texas, Holly Hunt discovered her love and knack for design at a young age. She first explored her passion via the world of fashion, inspired by fashion designers such as Edith Head and dabbling in the creation of her own clothing designs. When it came time for college Holly pursued her design interests and graduated with a degree in English literature and clothing and textiles from Texas Tech.

After finishing school she completed an executive training program to become a buyer at Foley’s department store (which belonged to Federated Department Stores (now Macy’s)). She jokingly told the Robb Report this is where she earned her “MBF,” or Master of Business, Federated and went on to explain, “I don’t think those training programs exist in the same way today; you learned from the basement all the way to the top. If you really want to run a business, I think you need to know what goes on, and how it works. I chose to learn every single working part. It was invaluable to me in starting a business from scratch.”

Looking to pursue her love for design more directly, Holly left Foley’s and moved to New York City in the early 1970s where she became a design assistant to the President of a costume-jewelry company and met her now ex-husband Ron Tackbary. After dating for several years the two married and Holly joined his truck trailer leasing business in Chicago – she ran the office and he did the sales. It was far from a career in design, but the two made a fortune and lived a lavish lifestyle allowing her to maintain her creative outlet through the decoration of their homes and offices (her first real foray into the world of interior design). But by the early 1980s with her marriage on a downward spiral, Holly decided she wanted a career back in design so she purchased the nearly bankrupt R.J. Randolph showroom in Chicago’s Merchandise Mart, a place she often visited while furnishing her own homes.

Then with three sons under the age of eight, she divorced her husband and in a true testament to womanly power she took on being a single mother and full-time business owner. Using her innate eye for good design she re-curated the showroom and within four years had it breaking even. She quickly became known for her lavish displays and savvy marketing tactics – and this was just the beginning!

Through her skilled eye and knack for spotting talent, Holly rapidly grew opening new showrooms around the U.S., championing the designs of now-well-known designers such as Rose Tarlow and Christian Liaigre and most recently Vladimir Kagan, launching her own collection of textiles with Great Plains in the early 90s followed by her own indoor and outdoor furniture and lighting collections. In 2011 she completed the biggest design launch in company history with 80 new introductions to her collection, Holly Hunt Studio.

The year 2014 was a big one for Holly, she opened her first European location in London, a flagship showroom in Dallas and sold her business to Knoll for $95 million! The Holly Hunt brand exists as a subsidiary of Knoll and Holly still serves as CEO and maintains control over the creative direction of the company and all eleven showrooms, clearly a good decision on Knoll’s part as this superwoman knows what she is doing!

In addition to reigning over the furniture industry in her look category (what she calls minimal, eclectic, and with a blend of modern and transitional references), Holly also oversees select residential and commercial interior design projects. Her recent work includes Little Nell resort in Aspen, Colorado and the luxury residential development L’Atelier Miami Beach where Steve Hafner, co-founder of kayak.com, recently purchased the Holly Hunt designed penthouse for a mere $21 million!

Holly is also an avid art lover and collector and as you might imagine her own home, a 4,600-square-foot co-op on Chicago’s Gold Coast, is beautifully designed and filled with pieces from her furniture collection alongside amazing works of art.

An arbiter of refined taste, a connoisseur of the unique and a powerful and influential female entrepreneur in the world of design, Holly Hunt’s drive, focus, and success are truly empowering!

Words of Wisdom from Holly Hunt:

“Be curious, be a sponge, learn about everything—it all goes into what you’re doing.”