Top 20 Most Beautiful Libraries in the World 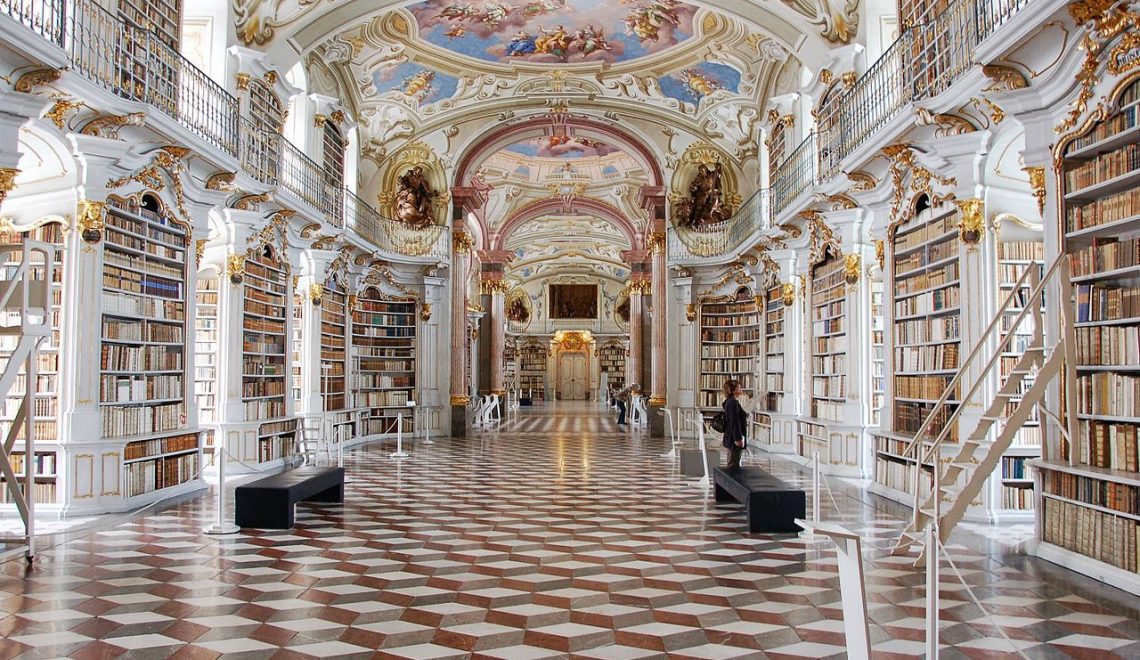 At Love Happens, we love appreciating the history of design. History and preservation are key aspects of library design. These 20 beautiful libraries are architectural masterpieces that house many of history’s most important texts. Enjoy!

In 1722, the Klementinum National Library opened in Prague as part of a Jesuit University. It is now home to the National Library of the Czech Republic, containing over 20,000 volumes of foreign theological literature. The library’s interior includes rich amber and gold spiral pillars, ornate ceiling frescoes done by Jan Hiebl, and a portrait of Emperor Joseph II at the end of the hall. This portrait signifies the work done in preserving books from the abolished monastic libraries.

Minimalistic Stuttgart City Library is home to nine-stories of literature and is one of the most beautiful libraries in the world. Yi Architects’ design approach included an open multi-floor reading room, shaped like an upside-down pyramid. The combination of clean lines and white surfaces allow the magic of the thousands of books to fill the space with life and color.

The Wiblingen Monastery Library was completed with design direction from Christian Wiedemann. The monastery was founded in 1093, however, the library was not completed until 1744. This library contains 15,000 texts majority filled with Pagan and Christian imagery.

Etched exterior and historical interior combined to create the Bibliotheca Alexandrina. In 2002, it was inaugurated to honor the ancient world’s largest library. Prior to the fire 2,000 years ago, the original Library of Alexandria contained the largest collection of books of its time. Snøhetta, an architecture firm from Norway, redesigned the new library. It includes room for eight million books, four art galleries, four museums, a manuscript restoration lab and a planetarium. The etches on the exterior of the building portray the evolution of human language and make it one of the most beautiful libraries in the world.

The Admont Abbey Library is in a Baroque-style building. Home to 70,000 volumes this library is part of one of the oldest and largest monasteries in Austria. Joseph Huebner developed the beautiful library in 1776. The elaborate artwork by Bartolomeo Alromonte represents different phases of human knowledge.

In 1822, three Portuguese immigrants founded the Royal Portuguese Cabinet of Reading. This beautiful library is home to 400,000 rare manuscripts, unique proofs, and singular works. In 1887, the library became open to the public. The Portuguese brought literary traditions and masterpieces to Brazil, which was newly independent.

Located at the University of Coimbra in Central Portugal, Biblioteca Joanina is one of the most beautiful libraries in the world. The library was built in the 18th century during the reign of the Portuguese King John V and is a national monument. Biblioteca Joanina is one of two libraries in the world whose books are protected from insects by the presence of bats. The bats come at night and the building is cleaned in the morning to preserve its beauty.

Design Lover’s Guide to Portugal: Things To Do In Portugal for Architecture, Art & Design Lovers

The Library of El Escorial

Filled with the Magna Carta and Shakespeare’s First Folio to name two of the 13 million volumes, the Bodleian Library is one of the most beautiful in the world. This library is the earliest example of a circular library layout.

Located in the heart of New York City The Morgan Library & Museum is one of the most beautiful libraries in the world. Home to a private collection of fancier J.P. Morgan, bronzed bookcases holds original manuscripts of Sir Walter Scott and de Balzac.

In 1857, George Peabody founded the Peabody Institute. Peabody dedicated this beautiful library to the citizens of Baltimore. Johns Hopkins University references it as the “Cathedral of Books”. The library contains nearly 300,000 volumes of text.

The Biblioteca Vasconcelos is an 820-foot building, created by Alberto Kalach. This beautiful library is located within a botanical garden and doubles as a gallery for artists to display work. For example, Gabriel Oroxco’s Ballena, is featured here.

The Tianjin Binhai Library was designed by Dutch design firm MVRDV. The five-story space is home to 200,000 texts. The majority of the books are printed images of spines to create an illusion of stock. The curved seating and floor-to-ceiling shelves are full of this “stock” creating a sea-like feeling of motion.

The Beitou Public Library is the most beautiful ecological library. The large French style design allows natural light in. The slanting of the roof captures rainwater, to be used for the bathrooms. And balconies overlook the natural gardens immersing you in nature.

Tama Art University Library is a beautiful minimalistic structure. Toyo Ito designed the library in 2007. He used curved inspiration from the sloped surrounding environment. The library features a gallery on the first floor and 100,000 volumes on the second floor.

In 1368 the Bibliothèque Nationale de France was founded. Currently, home to over 10 million volumes, and spanning over four locations, the first-ever collection was placed in the Louvre. The library is home to some of the most amazing works of art and is one of the most beautiful libraries in the world. Works include King Louis XIV’s globes, previously found at Versailles.

Comprised of three buildings, the State Library of South Australia preserves stories of the Kaurna people in South Australia. The modern Catherine Helen Spence Wing, the Historic Mortlock Wing, and the studious Institute Building. This beautiful library is comprised of modern and Victorian design. And the Mortlock wing is compared to Hogwarts, from Harry Potter.

The Library of Parliament was founded in 1876. Designed by Chilion Jones and Thomas Fuller, the inspiration came from the British Museum Reading Room. The beautiful library serves as the primary research center for the government of Canada. The statue of Queen Victoria, done by Marshall Wood, is placed over the 600,000 volumes of text in the library.

10 Most Beautiful Places from Around the World