The Wild Ingeniousness of Alessandro Michele and the Gucci of 2020 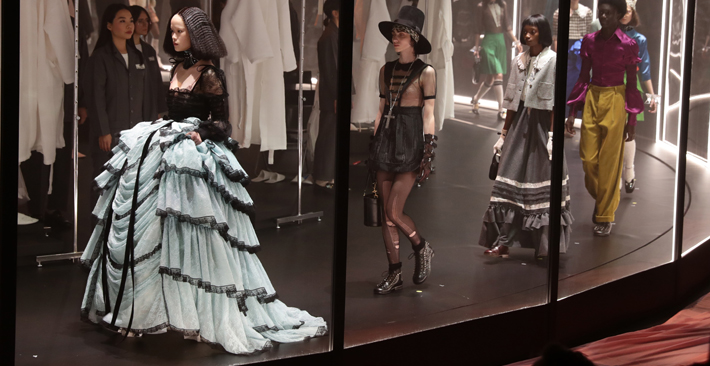 On February 19, 2020, Gucci and it’s out-of-the-box creative director Alessandro Michele once again shook things up in the world of luxury fashion during the Gucci Fall Winter 2020 Women’s Fashion Show. And this is not the first shake up the almost 100-year-old brand made this year! From its new childish handwriting-style script temporary logo to the launch of GG Psychedelic Collection and the collection’s special showcase in Chicago at the GG Psychedelic Pin pop-up experience, Gucci and Alessandro Michele are surely keeping their brand front of mind.

Read on for details on all the wild ingeniousness at play. You may love it, you may hate it. But either way, it is worthy of discussion which means a job well done. Assuming the sales follow of course, but we are guessing they do.

Gucci caused its first stir of the year in January when it presented an updated logo on its Facebook page. The unusual font, which looks like a young child’s early attempts at cursive, came into play in sync with the brand’s Fall Winter 2020 Men’s Collection debut during Paris Design Week.

The temporary new logo and branding campaign was designed to evoke children’s birthday parties. Other accompanying promotional materials featured the tagline ‘Rave like you are five’. And event invites were inspired by the embellished birthday party invitations the children of nobility sent to their friends (below).

Gucci certainly took a risk with the new look and definitely created some controversy and noise. However, Alessandro Michele’s decision to tailor the brand’s logo to the new Fall Winter 2020 collection launches, which were heavily linked to childhood, was a creative branding play regardless of your opinion on it. And a move which we can imagine more taking on as brands adapt to the digital age.

More to love: Why Are Luxury Brands’ Logos All Looking the Same?

The backstage hustle and bustle of a fashion show are usually hidden from guests. But this was not the case at the Gucci Fall Winter 2020 Women’s Fashion Show during Milan Fashion Week. Alessandro Michele, in true form, flipped this the norm on its head. The magic of behind the scenes became a focal part of the show as the team of hairstylists and make-up artists, and other frantic staff members took to the stage in the center of a rotating carousel. Guests (and live streaming viewers around the world) watched as Michele himself made last-minute adjustments, and head stylist Paul Hanlon and global make-up artist Thomas de Kluyver along with their teams primped the models who then made their way to the encircling runway presentation simultaneously in full swing.

Gucci’s AW20 Women’s collection, similar to the Men’s and in line with the new logo, featured childhood inspired looks, according to Alessandro Michele who reportedly explained backstage, inspired by his own way of dressing as a child, and his appreciation of childrenswear.

“The world of childhood is something that is surprising, poetic, captivating. And all the small things that children do. This is something that connects all of us. We were all afraid of losing our childhood,” he said. “Sometimes when I look at children’s clothes in markets, I do buy them. Some are really incredible, very beautiful. What is small has a very particular fascination for me, because it’s connected to the world of children who are allowed to do what they want.”

And while Alessandro may have been inspired by a childhood-esque theme, we also see a strong flair of “grandmillenial” style in the collection. A style also referred to as “grandma chic” for the way it takes old school style and updates it. And an eclectic and transitional style that is most definitely currently trending in both interiors and fashion.

As we have noted numerous times so far in this article, since taking the reigns of Gucci in 2015, Alessandro Michele has made a name for himself with his distinct and unconventional approach to luxury fashion. And again with the newly launched GG Psychedelic collection, he continues to shift the Italian fashion house’s vibe towards youthfulness and gender fluidity.

Some may say Alessandro’s moves are too bold, pushing away the brand’s long time loyal customers, however, his maximalist aesthetic continues to push Gucci forward into the future. A future filled with young, dynamic consumers who hold a different kind of values when it comes to high-end fashion. Gucci explains the rich vibrancy and energy of the GG Psychedelic collection on their site:

“Channeling the spirit of ‘70s psychedelia, which played with visual distortion, surreal imagery and wide color spectrums, this decorative and distinctive pattern is a vibrant reimagination of the House’s emblematic monogram. Embodying the streetwear attitude that continues to speak to the Gucci narrative, the design animates key items from ready-to-wear and accessories, bringing them together to form a full collection.”

More to love: Behind the Scenes – The Gucci Story

The Gucci GG Psychedelic collection is available now on Gucci’s website and at select Gucci stores. It will also be sold from February 14 through March 2nd, 2020 at the Gucci Chicago Pin at 160 North Morgan Street, Chicago (read all about this intriguing pop-up next!).

As part of Gucci’s “Pip” pop-up series, yet another innovative marketing tactic, the brand opened its third iteration in Chicago on February 2nd, 2020. The 70’s era glam space features the GG Psychedelic collection and offers visitors a disco-inspired experience.

In addition to selling the brand’s Psychedelic collection, the pop-up launch party also celebrated Gucci’s Chicago-based community connections, newly forged through the Gucci Changemakers North America Initiative. An initiative formed to increase inclusion and diversity within the fashion industry and across communities led by Renée Tirado, Global Head of Diversity, Inclusion, and Equality at Gucci.

And There You Have It

Whatever your take on Alessandro Michele and Gucci’s wild campaigns, initiatives and styles may be, the brand is certainly moving and shaking its way into 2020!