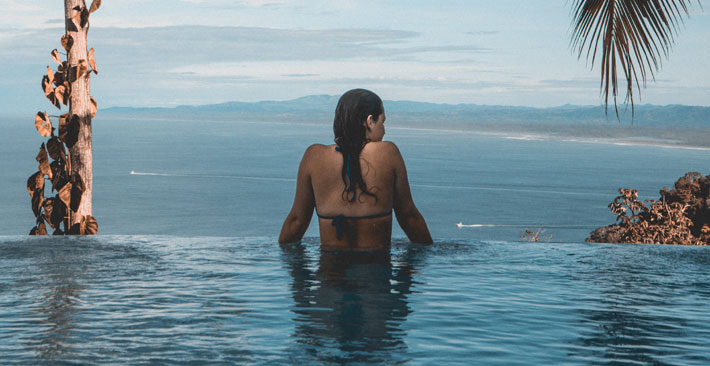 Costa Rica appears a beautiful place to go, all the pictures online look incredible! But why is Costa Rica one of the best destinations for a vacation? And what can you see and do in Costa Rica?

Read on for our twelve reasons why Costa Rica is one of the best vacation destinations to visit in 2020!

Costa Rica’s home to 27 national parks and 5 percent of the world’s biodiversity, according to Culture Trip. But not all these are just jungles. There are cloud forests, swamps, coral reefs, dry forests, and rainforests as well. One of Costa Rica’s best things to do is take a hike to one of these protected lands, notably Tenorio Volcano National Park, where you can see the breathtaking waterfall of Rio Celeste.

Hiking Up A Volcano

There are currently six active volcanoes in this relatively small, Central American region, and more than 60 dormant or extinct. Arenal Volcano has to be one of the most popular attractions in Costa Rica, especially for people who want to hike their rough terrain or dip in the soothing hot springs of the geothermal region. The area is full of spas and resorts that take advantage of the natural hot springs.

According to CostaRica.org, more than 30 percent of the country is national parks, ensuring there are plenty of areas to survive for animal populations. And there’s some wildlife to explore pretty much anywhere you go. There are more than 500,000 animal species to enjoy while you’re there, including scarlet macaws, howler monkeys, colorful butterflies, humpback whales, iguanas, sea turtles, and sloths.

One of Costa Rica’s best-known mottos is “Pura Vida,” meaning “pure life.” And Costa Ricans always take that to heart. And Costa Ricans are taking this to heart, really. Cultures and people are quite different, but many like to live by this essential ability to live life to the full, this is possibly why, according to the Happy Planet Index, the country is considered as happiest. The question is also used as a greeting or as a response when someone asks, “How are you?

Costa Rica is one of those underrated food destinations and is often ignored by people for its culinary treats. Several of the most popular dishes include pejibayes (peach palm fruits), turn a la vida (like ceviche), and arreglados (sandwich type). San José has also gained popularity as a hip town for young chefs and craft brewers. This makes it a great place to enjoy new cuisine.

It has been established that Costa Rica cares for its environment and is making significant efforts to protect its national parks. The same is true for the beaches too. For this reason, the country has more than 800 miles of untouched, scenic shoreline on both the country’s Pacific and Caribbean sides. Tamarindo has to be one of the most popular beaches in the Guanacaste Province, and is particularly good for surfing and spotting sea turtles.

Some of the world’s best coffee comes from Costa Rica, so it’s a paradise for java lovers. Costa Ricans consume about six cups of coffee per day, by some reports, and it’s one of the country’s main drivers for the economy. Needless to say, a nice cup of joe or a bag of coffee beans will probably be found while you are here.

If you are not drinking coffee, you can settle for another drink of choice from Costa Rica: cacique guaro. The clear, sweet liqueur is made of cane juice from sugar and has a very high alcohol content. Drinking it in shots is not recommended unless you’ve had it before. Most people, though, drink it chilled with sugar and lime, or in a cocktail.

Close Proximity To The United States

Moving from the US to Costa Rica is simpler than ever. It’s just a two and a half hour plane ride from Miami and a six-hour flight from LA or a five-hour plane ride from New York, according to CostaRica.org. Plus, several airlines offer the country low-cost flight deals, so it’s effortless to schedule a budget-friendly holiday. Whatever time of year you are going, there is always something to do.

Costa Rica is not just a rugged holiday for adventure seekers. It has such lovely beaches, rainforests, and hot springs at their fingertips. It is a blissful place to enjoy a relaxing spa getaway, too. The area surrounding Arenal Volcano is particularly famous for its luxurious resorts and spas offering relaxing dips in the natural hot springs. Beach resorts are also becoming increasingly popular in the area, with easy access to the beach and five-star accommodations for people who are not interested in “roughing it.”

More to Love: How to Vacation Like a Celebrity

It Is The Hummingbird Capital of the World

And when it comes to birds, Costa Rica is probably the world’s hummingbird capital. According to CostaRica.org, the country is already a beautiful place for bird watchers, but it’s especially great if you’re looking to catch a glimpse of one of the 50 different hummingbird species that live there. The violet sabrewing, the copper-headed emerald, and the magenta-throated woodstar are some of the types of birds that you might meet.

To Have New Adventures

If you are looking for lots of exciting outdoor activities. You will probably find it in Costa Rica, no matter what type of adventure you’re in. There are hundreds of tour companies specializing in river rafting, fishing, ATV driving, scuba diving, hiking, horseback riding, and even rainforest zip-lining. There are plenty of places to walk, surf and swim too.