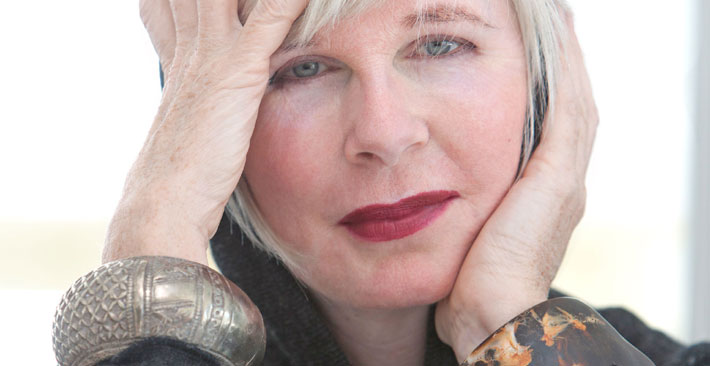 We’ve all been there, that moment when you learn about someone who has done so many amazingly cool things in their life that you feel inspired and energized to reach for your own dreams. I had one of these moments recently while interviewing Linda O’Keeffe.

As Metropolitan Home magazine’s creative director for 16 years, a fashion and interiors expert, longtime journalist contributing to top publications, author of numerous books, and a talented photographer, Linda has quite the resume to say the very least! Within minutes of speaking, I quickly learned, on top of just a killer resume, she accomplished it all with grace. Linda’s passion, drive, and warm-heartedness reminded me that when you follow and stand up for your dreams they will become a reality. So read on and be inspired to be you, be your best you, be kind but steadfast, and reach for the stars!

I asked Linda O’Keeffe to start at the beginning. And so began her inspiring story.

“I have always had a sense of design, I grew up with it. And consequently [giggle], or rather, as a result, I was always thought of as a strange kid. I could walk into a room and feel that things needed to be repositioned, from the earliest age this was me. We happened to move around a lot when I was a kid growing up in London. So I had lots of opportunities to redecorate….or not so much redecorate, because we didn’t have lots of money – more or less redoing the same furniture we had but in different locations.

“I always knew that my sense of wellbeing, my sense of balance was affected by what was in the immediate space I was in, I had from the beginning a sense of proportion and balance and mass and space and negative space. So, as I said, as a result, I was thought of to be a very weird child because this wasn’t something the rest of my family had, and no one knew where it came from.”

Next, Linda went on to tell me about her professional career path. Despite her childhood attraction to interior design, she did not go into the field right away. First, she chose to pursue photography. “I always thought I was going to be a photographer,” Linda said. But a woman of many interests and talents, photography wasn’t it. She also dabbled in acting and had a line of jewelry. Next came fashion. But after a few years as a fashion stylist, Linda realized that her heart really lay in interiors. “It was just something that I did intuitively,” she explained. So, she began abandoning the worlds of fashion and photography to follow her love for interior design.

At first, Linda felt a bit bad about abandoning her long time love for photography. But when she discovered she could actually still be a photographer as a creative director and producing editor she realized she wasn’t really abandoning anything. She was just shifting! A shift which she noted she has kind of come full circle on with her most recent book, Inside Outside: A Source of Inspired Garden Rooms in which she personally photographed 5 of the book’s 25 gardens.

Linda began working freelance, contributing to top name publications like Elle Decor. Where she then became the Special Projects Editor before moving to Elle Decor’s sister publication at the time, the former, Metropolitan Home.

Met Home was the first full time (non-freelance) job Linda took in many years. So, of course, as fate would have it this was when she was also commissioned to write her first book, the infamous Shoes: A Celebration of Pumps, Sandals, Slippers & More (and if you are a shoe lover and haven’t heard of this book – get on it!)

Linda completed Shoes and stayed on at Met Home for 16 years, at which point the magazine abruptly folded in 2009 due to the recession. It was Monday morning and as Linda and her team sat around the conference table they were given the news.

“People went into mourning when the magazine closed. My email box was bombarded. But I was not devastated personally at all. I could have stayed on happily there forever, still now, but all of a sudden I thought the world is my oyster.”

Before diving back into another fulltime venture, Linda decided to enjoy herself first by “spending about 3 months doing nothing really structured,” she laughed. “I went to the movies in the middle of the afternoon, had long boozy lunches with friends, all the things I felt guilty about doing while working.”

“When you work in a large corporate entity everything becomes institutionalized,” she explained. “Freelance life is so different, I never had any free time at Met home.” Thus it was during this break that Linda felt a real sense of liberation and realized that the corporate world was not for her.

Curious about her thoughts on freelance vs. corporate I asked Linda O’Keeffe to elaborate on this.

“The corporate world tends to be about protecting what you have, being cautious about what’s out there if you don’t do xyz there is always someone ready to take your place,” she replied. “And it’s even more daunting as you approach the top because if you get kicked off you have to go somewhere else. I knew editors who left magazines and could never find an equal position.”

“Freelancers are as good as their last assignment/job,” she went on. “But to be successful you have to have a sense of confidence about who you are from the get-go.”

A World of Books

After Met Home and her break, Linda dove back into the world of freelance. And in particular the world of books.

“I have been very very lucky in my life. I’ve had so many supportive, generous people help me along the way. I have a tremendous sense of gratitude,” Linda began, before telling me how she got her book contract with Monacelli Press. While at Met Home Linda met renowned interior designer Vicente Wolf who had published books with Monacelli. Vicente insisted Linda meet them and proceeded to drag her to a meeting there that led to a three-book deal: Brilliant: White In Design; Stripes: Design Between The Lines; and Expressive Modern: The Interiors of Amy Lau.

While discussing her books Linda told me how one of the things she loved about Met Home was how geographically democratic it was. “Elle Decor and Architectural Digest feature lots of projects in LA and NYC, but Met home had a real commitment to uncovering design from cities around the country and world.” A theme Linda intentionally followed in all the books she did after leaving Met Home from the Monacelli titles noted above to Heart and Home: Rooms That Tell Stories and most recently Inside Outside: A Sourcebook of Inspired Garden Rooms in which the gardens she features are from a diverse group of locations.

Inside Outside: A Sourcebook of Inspired Garden Rooms

In 2019 Linda released Inside Outside. It was this book that led to my introduction to Linda for this interview, as the second I saw the press release on it I needed to learn more!

My first question to Linda was, why gardens?

“When I first started to work on it I got a really bad case of poison ivy. Then the second year I looked at the garden like alien territory. Finally, after I finished gutting and renovating I decided to put a deck on one side of the house.

“The contractor asked if I had a drawing, I said no, and just drew it. I knew proportions and while I was doing it I thought how odd it was that I knew what I was doing. I just instinctively based it on the proportions of the house – relating the parts, standing back. It was kind of a duh moment.

“This is when I became a lot more fearless about going outside and saying ok I’m going to do this and this. I started to approach it with an interior designer mindset. A lot of designers do their job intuitively, the best designers anyways. I am actually amazed at how segregated the professions in the design world are – interior design and architecture are really two sides of the same coin. And many designers are not interested in connecting the inside and outside of a home. So eventually these thoughts all led to Inside Outside.”

Words of Wisdom from Linda O’Keeffe

What three pieces of advice would you give to someone looking to make it in the publishing industry?

“Be passionate about everything you do.

“Do what you do professionally and get paid as much money as you can for it, knowing that you would gladly do it for nothing.

“Always go after ideal scenarios. Always envision the best-case scenario for you.

“Ask for what you want, respectfully of course. The worst they can say is no.

“You have got to like and respect the people you work with.

What do you believe is the most valuable lesson you’ve learned throughout your career? The thing you wish you could tell yourself when you were first starting out?

What’s Next for Linda O’Keeffe

“At this point in my career I am always focusing on, do I really like what I am doing now,” Linda begins when asked this question. “I want to feel good about the quality of work and like/respect the people I am working with. This is another plus to freelance because you can choose this.

“I love the diversity of what I do, I am so grateful that I am able to make a living at something like this. I am surrounded by beauty and by people who are striving to make their own and other people’s lives better.”

Be sure to look for articles by Linda in your favorite publications and check out all of her past books (and for sure new ones to come!) Next on Linda’s launch list is an exciting book collaboration with the fabulous Amsterdam-based interior designer Kate Hume. Titled Elan: The Interior Design of Kate Hume the book will launch early summer 2020 and Love Happens will be sharing an exclusive interview with Kate around then too so stay tuned.