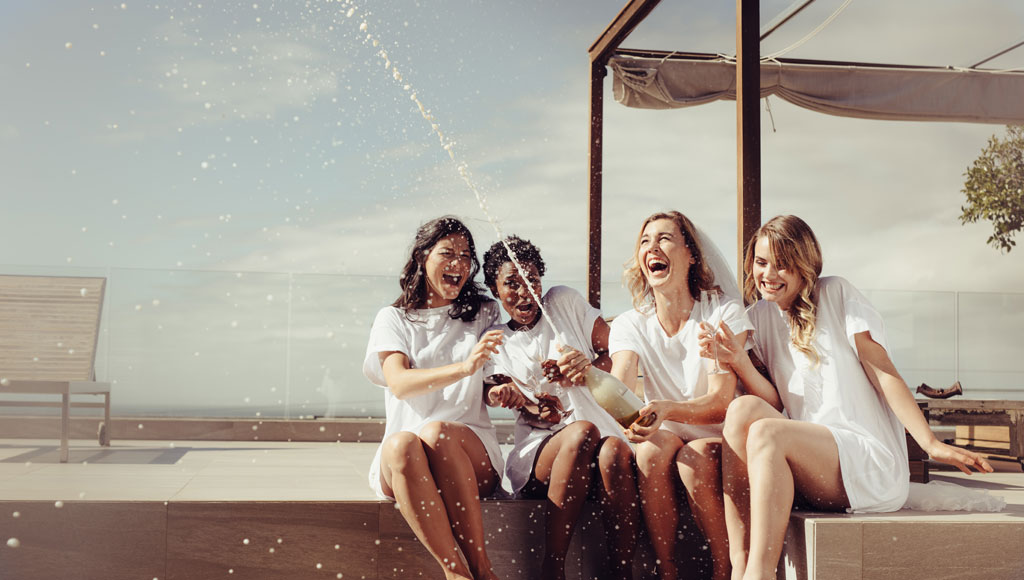 In our society, we most often celebrate those moments and the rites of our lives with Champagne. The sound of a cork popping means there’s a party going on. So, I started wondering what fizzy, nose-tickling liquid gold people poured into elegant crystal flutes for a celebratory toast.

I only drink Champagne on two occasions, when I am in love and when I am not.

The Most Expensive Bottle

Along the way, I found the most expensive bottle of Champagne, in the world, and it costs $2.07-million. It’s the 2013 Goût de Diamants (Taste of Diamonds) Limited Edition Salmanazar.

The opulent bottle features an 18-carat white gold label and shield embedded with a 19-carat, deep cut, flawless diamond. There are 9-liters in a Salmanazar suggesting it costs $6,802 an ounce. Just for fun, gold is trading at $1,800 an ounce.

In comparison, the typical everyday bottles from Diamants feature hand-finished pewter labels embedded with Swarovski crystals. A pink crystal for Rosé and blue for Brut.

The Diamants comes from the Chapuy family-run estate in the Champagne-Ardenne region of France. The group decided to call in a designer to create an opulent bottle in celebration of the rare Grand Cru.

The bottle was handcrafted by Alexander Amosu of diamond-encrusted Blackberry fame. He is known for his luxury designs for Apple, Motorola, Samsung, and his Guinness World Record for a $500,000 suit.

The difference between the two is geography. It’s only Champagne if it comes from the Champagne region of France and grown in that soil. It must also be processed using the Méthode Champenoise.

Méthode Champenoise is a labor-intensive process. The part most people are familiar with is riddling. Riddling is when the bottles are filled and stored in racks slanting downward. They must be turned a quarter of the way every day or so. That’s fiddling.

The whole debate started in the trenches of WWI. The Germans wrecked, among other things, France’s vineyards, drank all the good stuff then called their sparkling wine Champagne.

Remember gentlemen, it’s not just France we are fighting for, it’s Champagne!

The French ensured that no country labels a sparkling wine as Champagne. Basically, wine production grew in the 1970s and the soaring sales of California Champagne and wines infuriated the French. By 1983 they felt they had to do something.

The United States and the European Commission settled it by reaching an agreement in 2005. Semi-generic names like Chablis, Sherry, and Champagne would no longer be used in the US, except in cases where a name had been used since before 2005.

Mainly Champagne. So, in comes the 100-year loophole that protected us for decades. The Treaty of Versailles that ended the war led to the loophole.

One part of the Treaty established that only sparkling wine from Champagne was legally Champagne, no other country could use the label.

Long story short, all nations signed the Treaty. While the United States signed it, the Senate never ratified it.

Because Cook’s, André and Korbel were labeled before 2005, and the years of the European Commission’s involvement, they can legally claim to be Champagne.

The crazy thing is that they are Champagne. Same grapes, same process, and soil. Just not French soil. The “Champagnes” of other countries include Italy’s prosecco, Spain’s cava, and Germany’s sekt. Brazil and others have their versions and many new ones will hit the market in 2021 and 2022.

Champagne continues to represent luxury and it isn’t cheap. On top of that, crazy things happen. Several years ago, a shipwreck was found in the Baltic Sea. Bottles of Champagne were discovered, some over 200 years old and in great condition.

The shipwreck also contained an 1820 Juglar Cuvee worth $43,500. Because Juglar Cuvee didn’t exist after 1840, the barnacle-encrusted bottle is even more precious.

Back to who’s pouring what. Dom Pérignon is de rigueur for royal weddings. Obama served Korbel at his inauguration (good old USA).

Moёt & Chandon is a staple for celebrations. It’s one of the most beloved houses and represents pure glamor.

For bridal showers, party favors, engagements, and brunch, Veuve Clicquot is iconic and has been a sign of luxury since 1772.

No surprise, Dom Pérignon rates as the best for romance and important events. It’s prestige all the way.

Seen at family get-togethers is the young Champagne house of Nicolas Feuillatte because of its high quality and affordable price.

G. H. Mumm is known for its smoothness and ability to pair with just about any food. The perfect 5-star dining splurge. You may be most familiar with it for its appearance on the podiums of Formula1 and luxury sporting events such as polo and golf.

The Ongoing Allure of Champagne

There are so many more and so many fun stories along with the history of the Champagne houses. Little dramas and fun facts alike.

Twist? Sabre? Gun? Take one of those to your next party and see what happens. Those are all stories for another time. Right now, get a straw, share right from the bottle, a wine glass, or a gazillion dollar Baccarat crystal flute but never use good Champagne to make a mimosa!