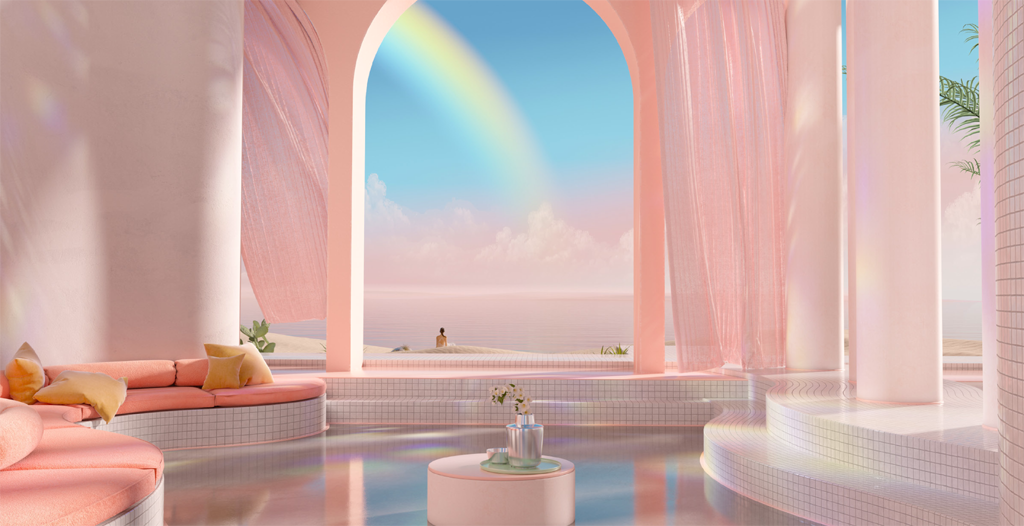 This year was an atypical year, especially when it comes to being able to travel freely. After confinement, most people chose to vacation nationally. Dream trips to exotic places around the world, far from home, were suspended. And like many things in life, when you can’t travel, you want to even more! It is for this reason that we were so delighted to discover the recently published book, Dreamscapes & Artificial Architecture. Ready to escape to surreal digital destinations without ever leaving your home? Read on!

Published by gestalten, Dreamscapes & Artificial Architecture takes readers on “a journey through dreamlike landscapes, bizarre buildings, and whimsical interiors floating between reality and fantasy” with works by over 40 leading digital artists from across the globe.

With roots in spatial design, the ideas presented offer a new creative current. One defined by the fusion of digital techniques such as computer rendering and 3D art. “Freed from the constraints of the physical world, these dreamscapes expand the possibilities for architecture and interior design.”

Here are a few of our favorites. For the full experience buy the book!

“Using a clear and decisive visual language of spaces, lights, shapes, and materials, Cristina Lello draws on her background in theatrical scenography to bring stories to life. Her goal is to create worlds that evoke sensations, rather than a real sense of inhabitability.”

“Hugo Fournier’s 3D works mix materials and colours into improbable sculptural configurations, combining furniture with household and art objects. His artistic trajectory began with Photoshop collages, but eventually, he felt constrained and turned to 3D, which allowed him to develop his fantastical ideas.”

“The studio’s designs aim to move viewers into a utopian space, if only momentarily. An overdose of visual information prompted Six N. Five to consider “willful escapism” as a strategy to access tranquility: lone furniture often takes centre stage in its compositions, evoking a sense of existential solitude.”

“While the resulting spaces are often fantastical in their settings, with a soft, utopian world view, she hopes one day to realize her designs. “My work is gradually moving towards actual spaces, blurring the line of what is rendered and what is existing. I envisage the spaces to become inhabitable architecture, something I am starting to explore in my practice through interior design projects and retail design.”

“Simon Kaempfer got his start in the gaming industry, creating dark, moody images in smoke-filled worlds. He soon found himself exploring the exact opposite – colour, playfulness, and blue skies – which led him to his current artistic practice.”

“Devoid of people, the environments evoke different responses depending on the viewer; they can either be a peaceful utopia or an intensely lonely world. BÜRO UFHO has worked with brands including Adobe, Apple, Facebook, and Mastercard. Yana and Jun, the artist couple behind BÜRO UFHO also set up an illustration outfit, kittozutto, which produces art for Nike, Esquire, HBO, and more.”

“In 2017, the studio began using architecture and interior design to mirror the shape of a phone for a project with Chinese electronics brand, Xiaomi. Now they bring interior design and architecture into almost every project they do. The studio has recently worked with Google, Nike, Oppo, and many more.”

“NotooSTUDIO reimagines the two-dimensional world of 20th-century masters as hypothetical 3D visualisations. The series InsideArt brings to life the styles, shapes, and colours that inspired great artists such as De Chirico, Mondrian, and Magritte, creating conceptual spaces in which the work interacts with contemporary furniture.”

“In his own playful renders, Colonna captures imagined scenes from urban and suburban life, but with a twist or detail pushing them into the extraordinary. “From a compositional point of view, architecture plays a big role in my images,” he says. “Architecture is often a co-protagonist together with the subject.” Architectural follies grace nearly all of his scenes, which are sometimes focused around a thematic idea.”

“Alexis Christodoulou wants to cut through the noise of everyday life. But rather than succumbing to complete escapism, he describes his visualisations as momentary “digital sanctuaries” amid the social media landscape. “I try to make my scenes as neutral as possible,” he says. “No comments, no buy in. I just want someone to look for five seconds longer than they usually look at something.”

13 of the Best Interior Design Books

“In some of Paul Milinski’s pieces, you might see patterns of steam on the glass objects. These are a subtle nod to his daily “epiphany showers,” in which he comes up with the shapes and forms to fit the mood he wants to convey. His surreal visualisations are dominated by vegetation, but he then adds architectural details and furniture to create a sense of security and comfort amid the eerier aspects of the natural world.”

“Many of Tudisco’s works feature human-like figures, contorted and modified into strangely fashionable alien hybrids, with gold teeth and emoji-tattooed faces. The dreamscapes he creates often contain something fleshy, like a hint of gray matter or a tongue, alongside soft textiles and glowing orbs. “

“During Andrés Reisinger graphic design studies, many of his professors were architects who taught him the importance of space and light for conveying his utopian visions. In his work depicting interiors, Reisinger uses plush textiles and pink tones to mirror the intimate crevices
of bodies—the inside of mouths and sexual organs—which elicit an uncanny sensation.”

By Inês Vidal
All images and content from Dreamscapes & Artificial Architecture, gestalten, 2020