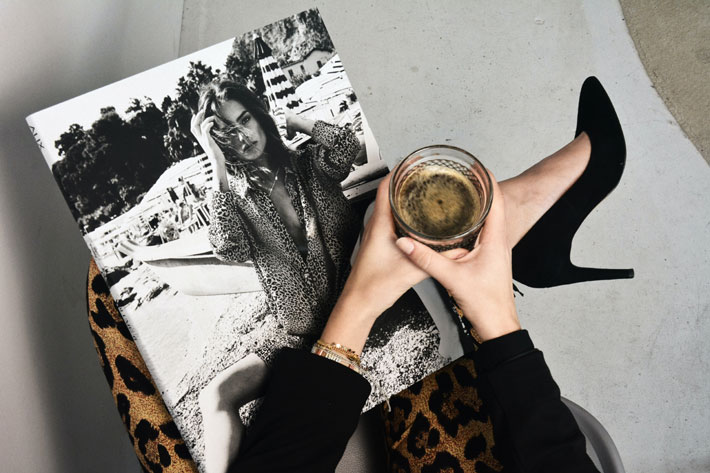 Historically fashion magazines were the ultimate fashion guide. Nowadays they still hold much power in everyone’s fashion choices, although they have lost some impact to Social Media and Influencers. That’s why it is important to support these outstandingly hardworking businesses that continue to deliver all of the new trends, gossip, and last-minute news in fashion every day. So, read on to explore our favorite 20 of the top most popular fashion magazines, happy reading!

Founded in 1892 as a weekly high-society journal, Vogue’s creator was Arthur Baldwin Turnure. Today it is one of the most popular fashion magazines, covering fashion, beauty, culture, living, and runway. During 1988 Anna Wintour became editor and transformed it into what Vogue is today: a global phenomenon. Wintour also created Teen Vogue and Men’s Vogue, expanding Vogue’s audience even more.

Founded in Paris in 1945 and first sold as a supplement to France-Soir, Elle is now one of the world’s largest fashion magazines. In short, its purpose is to inspire women to explore and celebrate style in all aspects.

First published in 1886, Cosmopolitan is an American fashion and entertainment magazine. One of the best-selling magazines, its chief editor is Jessica Pels. Often referred to as Cosmo, its content includes articles discussing relationships, sex, health, careers, self-improvement, celebrities, fashion, horoscopes, and beauty.

Vanity Fair originally meant “a place or scene of ostentation or empty, idle amusement and frivolity”. However, today it symbolizes an empire. Vanity Fair was firstly a short-lived, Manhattan-based humorous weekly. Then in the U.K., it turned into a publication known for its witty prose and its caricatures of men of privilege. In 1913, Condé Nast bought the rights to the name and introduced a new hybrid journal, Dress & Vanity Fair.

Marie Claire was founded by Jean Prouvost and Marcelle Auclair. Its first issue arrived in 1937, and was distributed each Wednesday until 1941 when it went international for the first time. Currently, Marie Claire publishes editions in more than 35 countries on five continents, and it addresses fashion and lifestyle.

Allure is an American magazine focused on beauty. Founded in 1991 by Linda Wells, the magazine comes out monthly. One of its iconic signatures is its annual Best of Beauty awards. Allure also frequently discusses and reports on several controversial health issues.

Instyle, another American monthly fashion magazine, focuses on beauty, fashion, home, entertainment, and celebrity lifestyles. Launched in 1994, it is currently an International publication for all who love beauty and fashion.

GQ, (Gentlemen’s Quarterly) is a men’s fashion magazine started in 1952. Then in 1957, it was converted into a quarterly fashion supplement for Esquire subscribers. Above all, GQ is distinguished for its relative sophistication among men’s style. In addition to fashion, it covers politics, travel, entertainment, sports, technology, food and wine, fitness, health, and relationships.

W Magazine’s history began in 1972. It was a sister pub to WWD. W is an American fashion magazine that features content such as style through the lens of culture, fashion, art, celebrity, and films.

L’Officiel was first published in 1921, the same year as Vogue. It is considered a French style bible!

Jalouse is a monthly fashion and trends magazine founded in 1977. Today it is a key publication for trendsetters. In addition, Jalouse is also an international reference in magazines for young people, due to its forever innovative and often provocative content.

The Italian edition of Grazia first hit stands in 1938. The magazine was inspired by Harper’s Bazaar. Today Grazia is the only 100% Italian fashion magazine sold across the world.

Founded in 1939, Glamour reaches an audience of 1,411,061 readers in the United States. Since 1980, the magazine has held an annual “Women of the Year” awards ceremony. Glamour launched in the UK in 2001 with the tagline “fits in your life as well as your handbag”.

Edmund Fairchild founded WWD in 1910, as an outgrowth of the menswear journal Daily News Record. It quickly gained a firm standing in the New York clothing industry, due to the influence of its first advertisers.

After 10 years as the editor-in-chief for Vogue Paris, the fabulously fashionable Carine Roitfeld founded CR Fashion Book in May 2012.

The Impression offers the latest fashion news, profiles of leading creatives, ad campaign reviews, fashion films, and marketing trends. Above all, it is one of the world’s leading resources for covering fashion runway from front of house to backstage.

In 2001, AnOther Magazine launched offering a blend of high fashion and world-class photography. Although it is only published twice a year, AnOther quickly established a reputation for highly original content. For example, numerous Hollywood cover stars such as Rihanna, Julianne Moore, Jodie Foster, and Michelle Williams. Today, AnOther is the most recognized biannual fashion magazine in the world.

T is a perfect-bound publication of The New York Times newspaper dedicated to fashion, living, beauty, holiday, travel and design. Launched in 2004 it is not an addition to the newspaper, but a distinct publication with its own staff. Further, since 2007, an international edition has been distributed with the weekend edition of The New York Times International Edition.

Words by Mariana Silva, Editor of Breakfast in a Silk Dress