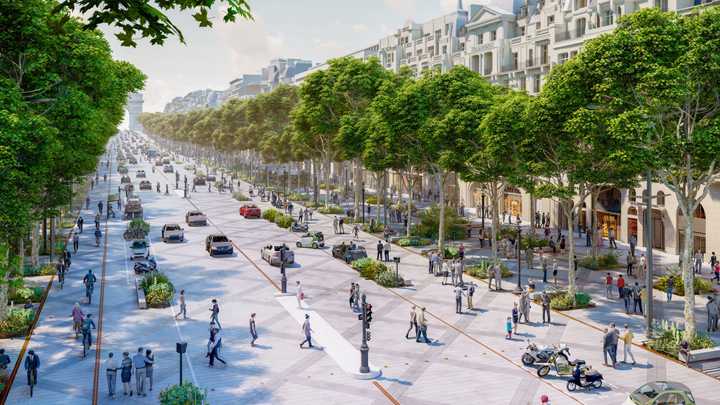 Last month we wrote about an imagined transformation of New York’s Times Square from a concrete jungle to a much greener one. No longer a space where cars dominate. Instead, an area designed for ample outdoor recreation. A place with trees, beautiful gardens, and water features. And paths for pedestrians and bikes, all alongside retail and hospitality spaces. Today we are writing about a real-life green transformation. A redesign of Paris’s most famous avenue, Champs-Élysées.

After beginning discussion in 2018, in 2019, the French capital’s Mayor Anne Hidalgo approved a €250m-scheme to turn the renowned roadway into an extraordinary garden. A project planned to officially break ground sometime after the city hosts the 2024 Summer Olympics.

“The legendary avenue has lost its splendor during the last 30 years. It has been progressively abandoned by Parisians and has been hit by several successive crises: the gilets jaunes, strikes, health and economic,” the committee said in a statement welcoming Hidalgo’s announcement.

“It’s often called the world’s most beautiful avenue, but those of us who work here every day are not at all sure about that,” Jean-Noël Reinhardt, the committee president said in 2019.

Now here we are in 2021, much has changed regarding how we view our built environment due to the impact of COVID-19. And imagining a new more humanistic, and greener Champs-Élysées today seems even more appealing!

In 1709, the avenue was renamed Champs-Élysées, French for Elysian Fields, the place for dead heroes in Greek mythology. Overtime the road expanded and by the end of the century had become a popular place to walk and picnic. And since a place deeply rich with French history.

Home to many historical monuments, today the avenue begins at Place de la Concorde in the east with the Obelisk of Luxor. It then passes through the Jardin des Champs-Élysées, a park which contains the famous Grand Palais (home to many a fabulous Chanel show!) and several restaurants, gardens, and monuments. Finally, it ends at Place Charles de Gaulle (formerly Place de l’Étoile) in the west with the Arc de Triomphe, a monument honoring Napolean Bonaparte’s victories.

The Plan for a Greener Champs-Élysées

The redesign plan includes reducing space for vehicles by half. Turning roads into pedestrian and green areas. And creating tunnels of trees to improve air quality.

Architect Philippe Chiambaretta, whose firm PCA-Stream drew up the makeover plans for Champs-Élysées, explains the redesign as one in which a place that summed up the problems faced by cities around the world, “pollution, the place of the car, tourism and consumerism” will be transformed into a place that is “ecological, desirable and inclusive”.

Paris is a city rich in beauty and history. And like many of today’s cities is in need of less gray and more green!

An article by The Guardian notes that “Hidalgo told Le Journal du Dimanche that the project was one of several intended to transform the city ‘before and after 2024’, including turning the area around the Eiffel Tower into an ‘extraordinary park at the heart of Paris’.”

The City of Light hopes to finish its refresh by 2030. And of course, we cannot wait to see the Paris of the future!