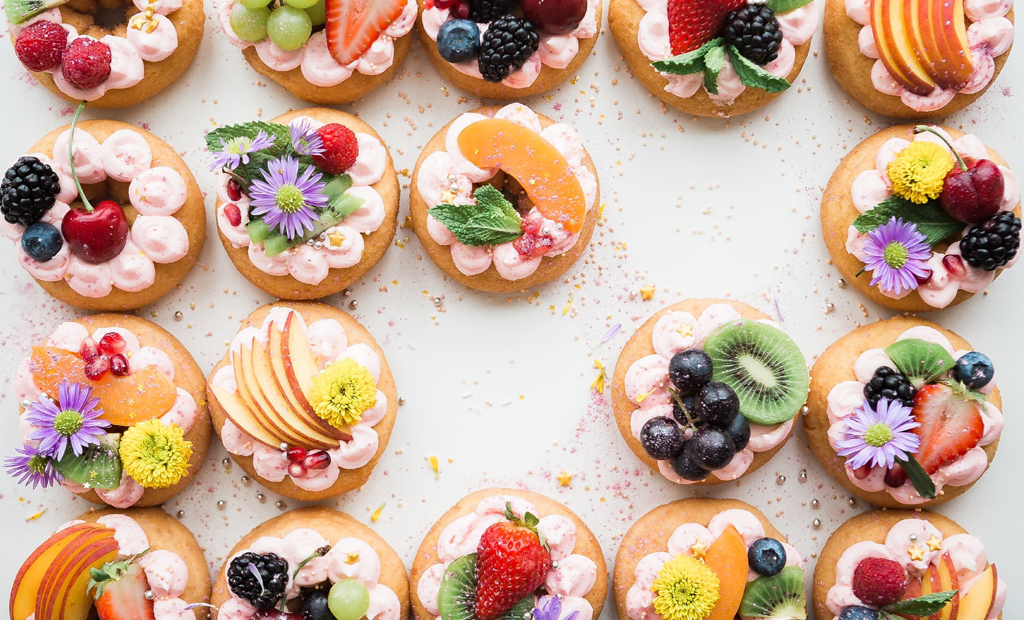 The world is known to be made up of differences. We all have different cultures, desires, and beliefs. But, there is one thing we can all agree on—desserts are amazing. Bakeries all around the world have consistently offered scrumptious baked goods for that very reason. Some have even gone above and beyond by offering great settings with their delicious treats. That is why we want to celebrate some of the world’s best bakeries that take the cake for their beautiful designs and appetizing foods.

Shugaa is a pastry cafe located in Bangkok, Thailand that looks as great as its delicacies taste. Inspired by crystalized sugar, Thai design studio Party / Space / Design has constructed a space that reflects the best aspects of desserts. The combination of the sweet-inspired colors and the marble and rose gold accents makes this space both fun and luxurious. This palace of ‘patiserie’ is sure to satisfy taste buds as well as the eye.

In 1862, Louis Ernest Ladurée created a bakery in Paris that would ultimately inspire the best of Parisian tea rooms. Famous painter and poster artist, Jules Cheret, designed the bakery in 1871 after being inspired by the Sistine Chapel ceiling. The bakery attracted Parisian high society, which led to women making a new home for socialization. Today, Ladurée has many locations around the world, offering legendary macarons, pastries, and ice cream.

Founded by Cesare Salemi and Nick Palumbo, Dust BakeHouse takes us back to the root of baking. Not wanting to over-complicate the craft, Dust takes pride in the grain. The space’s simple and direct design located in Sydney, Australia represents Dust’s admiration for integrity. The transparency derived from the open walls and ceiling complements their open presentation of their food. The vast wall of bread invites you to see what delicious, genuine grain can produce.

Created by ONDO Studio, RE x SUGAR Bakery takes on a minimalist design to reflect both the traditional and modern Japanese aesthetic. Located in Nanjing, China, RE x SUGAR’s simple and natural essence emphasizes the focused commodity: fresh bread. Although simple, the bakery’s sleekness stands out as it serves up tasty Japanese treats in a grocery-style bakery way.

Laurel Galluci created Sweet Laurel Bakery after an auto-immune disorder restricted her from eating chocolate cake. Laurel decided to create delicious grain-free, dairy-free, and refined sugar-baked goods. When the recipe was just right, she partnered with Claire Thomas and established Sweet Laurel Bakery in Los Angeles, California. Now, Sweet Laurel is renowned for its delectable and healthful treats that are as pretty as the place they reside. The soft pinks and floral accents emphasize the wonderful sweetness in each bite.

Kanel is a family-owned Swedish bakery completed in January of 2020. Translating to “cinnamon” in English, Kanel was named after the owner’s traditional Swedish recipe for kanelbullar (cinnamon rolls). The architecture and design studio Fluo completed Kanel in Thessaloniki, Greece. Celebrating Kanel’s geographical influences, the design of Thessaloniki’s Kanel has both warm and cold elements inspired by the Swedish delicacies now on the coast of Greece.

Located in Annecy, France, Rose des Neiges offers scrumptious and gorgeous treats that are signified by its notorious pink and gold R. The glorious pink storefront is only the beginning of Rose des Neiges’s immersive atmosphere. The interior’s pink richness emphasizes the sweetness that the beautiful patisseir and chocolaterie has to offer. Each dessert tastes as mesmerizing as its presentations look, almost making them a shame to eat — just almost.

Founded by Carl Marletti in 2007, Carl Marletti Patissier is designed as a dessert box and perfectly tucked away in Paris. The front of the bakery is elegantly beautiful with its soft and glowing appeal. Once inside, you may indulge in the delicious and individualized French pastries that are signed with a silver leaf, marking the great work of Carl Marletti. Expect fresh delicacies as Carl’s team makes each pastry on-site.

Established in 1730, Stohrer is the oldest patisserie in Paris. King Louis XV’s pastry chef, Nicolar Stohrer, created this classic pastry shop that has been satisfying customers for generations. Paul Baudry, the decorate of the Opera Garnier, designed the famous patisserie. The incredible desserts that have been maintaining the reputation of Stohrer’s for all this time have attracted and satisfied countless customers, including Queen Elizabeth II.

LaPeri Bakery is a dessert shop that sits like a garden along 14th street in New York City. The sunroom allows the essence of the bustling city in while protecting the natural aesthetic of the manmade garden. People gather to enjoy amazing baked goods, breakfasts, and hot drinks served in beautiful tea sets while eating on turf surrounded by an array of colorful flowers.

Rosetta Bakery was created by an anonymous man who grew up in Italy with 5 siblings, one being a sister named Rosetta. His sister would bring bread to her siblings every day and they would equally partake in eating the food. Today, Rosetta Bakery represents the Italian art of baking within a cozy and homey designed space located in Miami, Florida. Rosetta offers gourmet focaccias, pizzas, sandwiches, and delicious sweets.

Back in the ’80s, Nancy Silverton created the perfect bread after being unsatisfied with her surrounding options. Once perfected, customers lined up each morning to eat her amazing sourdough recipe. Top artisan techniques were the key behind each sold-out bread. La Brea Bakery opened in 1989 and continues to serve the bread that would sell out within hours of its inception. Located in Los Angeles, California, La Brea Bakery is designed with various crust colors that signify the flavor of each bread.

Located in Chicago, Illinois, Lost Larson was founded by Bobby Schaffer and named after his “lost” last name: Larson. The bakery offers amazing food like hand-rolled cinnamon rolls, seasonally-inspired pastries, and other foods that honor the craft of baking. Lost Larson’s design is rich and inviting as its turquoise and brown details accentuate the dark pastries that are presented within the glass. There is also a glass enclosure that allows people to easily view a part of the baking process.

Aubaine Selfridges is a restaurant and bakery located in London, England in the Oxford Street department store. It offers magnificent breakfast items and enticing desserts that blend modern France with traditional tastes. People come from all over the world to eat a tier of desserts underneath the renowned ceiling of purple wisteria flowers. The venue offers a quirky, yet peaceful vibe that enchants all who gather within.

Peggy Porschen is a fun and charming cake shop and bakery that tells a story through its design and cakes each season. Peggy Porschen has always had a passion for cakes and the art of ‘British Sugar Craft’, which led her to create Peggy Porschen Cakes in 2003 alongside her husband Bryn Morrow. The establishment officially opened in 2010 in London, England. The cake shop is renowned for its creative and delectable cake artistry and picture-perfect design aesthetic.