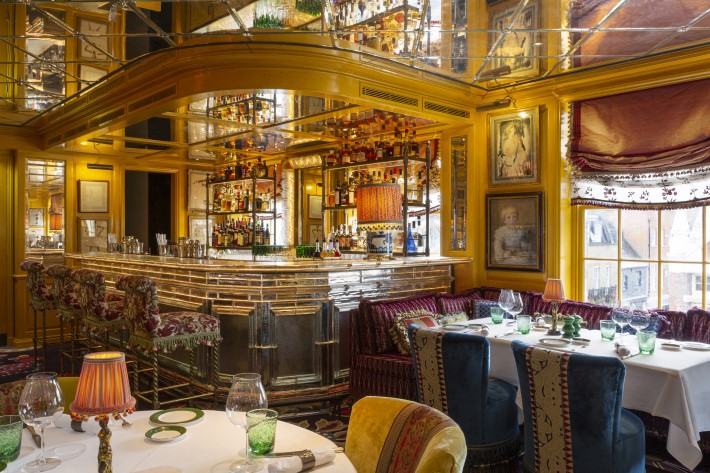 The iconic Annabel’s London members club opened its doors 52 years ago. And this month the brand launched a new Italian Restaurant called Matteo on the second floor of the Berkeley Square club. Keeping with true Annabel’s London style, the Matteo Restaurant exudes opulence, with decadent interiors led by Martin Brudnizki.

Prepare yourself to have your social feeds flooded by Matteo’s. (But be discrete – the photo policy at the club is tight!).

Design Magic at Annabel’s London in the New Matteo

The new restaurant pays homage to the classic London nightclub. Martin Brudnizki knew from the beginning that he wanted to create a design, where he could mix “the old with the new”. And more, he wanted to use similar styles to the original club while at the same time add touches of glamour. The refined space is covered in a palette of red, yellow and green. The designer also wanted to use Annabel’s memorable features, like the purple floral carpet, the massive gilded Buddha, tasseled furniture and fantastic art.

Brudnizki also added a mirrored ceiling and glass bar, that confuse us minimalists, even more. And we all know, this amazing designer really knows what he’s doing.

The new restaurant menu hosts an extensive selection of Italian wine and dishes, including risotto with edible gold truffle pasta, creamy burrata, and even Nutella “bombs”. And more, it will also boast the largest selection of Dom Perignon champagne in any restaurant worldwide. How cool is this?? The selection showcases 60 different expressions of Dom Perignon spanning five decades, from 1966 to 2008.

Don’t worry, the experience doesn’t end in the dining room. The bathrooms take you on a jungle experience. They feature bespoke panels decorated in all things animal print and florals, while elegant bird-songs play in the background.

All Photos Courtesy of Annabel’s